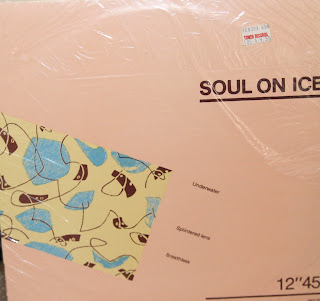 Here is the only 12" from a schizophrenic band called Soul on Ice. They also had a song on the "Your Secret's Safe With Us" compilation. They didn't really have a specific style: "Underwater" is a midtempo post-punk song that has influences of The Sound and Echo and the Bunnymen; Breahless sounds like the intro to an early U2 song with dub guitars, and Splintered Lens sounds exactly like early Shriekback. It's worth it for the latter for me, since I love that style of bass-driven post-punk and lazily mumbled vocals. Good stuff!

Worth having if only for the old Tower Records sticker. I may not have thought much of Tower when it was still around, but I kind of miss it now. I don't suppose you got this disc at the old Tower in North Beach, by any chance?
Thanks for the post.
--Daniel

Yeah, it's amazing how many old indie records I find (this one included) that have Tower stickers on them. I actually picked this up at 101 Music on Grant & Green, not too long ago.

This is a nice post-punk record, not essential, not bad at all, taking you on that trip to the early 80s that I like again and again. So thank you!

Im very late in the day on this onebut i loved this record and adored their next single "Widescreen" relased as a 7inch on the same label in 1983.