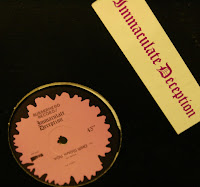 It's amusing how so many bands in the new wave era issued records with completely minimal information and credits. Many bands released records with no contact information whatsoever, or with only a single name in the credits. It's almost as if they were consciously striving to be mysterious, their mystique slowly growing each year as the memory of their very existence fades into the aether. This 12" is a perfect example. The record mentions no year (my guess it is was released between 1983-1985, judging from the visual aesthetics and the musical style), a record label name but no label contactl, no credits except for "Khi Patrick", no location, not even an insert sheet. I came across a few copies of this when I lived in San Francisco, which leads me to believe that they may have been based in the SF Bay Area, but that's pure speculation. Each copy I've seen has suffered from the same lack of info, so the record's origins may remain a mystery, unless this "Khi Patrick" can straighten things out.
The music here draws a pretty heavy influence from early-to-mid-80s Cabaret Voltaire. It's a bit industrial, full of electronics and samples and slightly danceable basslines and synth rhythms. The vocals a bit amateur and almost punk-ish, and somoewhat recall Ministry in their cheesy synthpop heyday.
Both songs are pretty good, though. Coporation Prostitute is clearly going for a commercial industrial sound with pulsing basslines, steady drums, and loads of electronics, although the
vocals are clearly not suited for a wider radio audience - they aren't bad, just a bit loud in the mix and unrefined, reflecting the DIY nature of the release. The B side is the more interesting song. It throws a slew of strange electronic sounds and synth lines in a blender and dumps the resulting mixture on top of a repetitive beat and more of those wonderfully amateurish vocals (sung in a strangely frantic sense, as if trying to sing through a speed-fueled rage). Overall, both tracks take the raw ingredients of early industrial and synthpop and arrange them in an interesting - if not completely unique - fashion. Are the songs hits? Download and decide...
Immaculate Deception: Corporation Prostitute 12"
198?, Rubberhead Records
A1 Corporation Prostitute
B1 You Know Who
Click here to listen to this record
Posted by goutroy at 6:46 PM 1 comment: 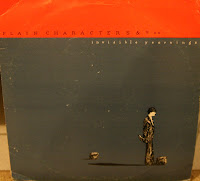 Here is a record that had all the makings of a classic: it was essentially the solo project of Colin Lloyd Tucker (The The, The Gadgets, and solo fame), featuring kinetic and sometimes antagonizing post-punk full of guitar stabs and shrieks and Tucker's over-the-top melodrama, released in 1980 in the UK during the height of post-punk's commercial boom. But somehow the album fell by the wayside and was all but forgotten. Perhaps it was released on too small a label (Abstract Records), or maybe there's such a variety of styles on this record that it borders on unfocused, or maybe it just suffered from simple lack of promotion.
Whatever the case for its relative obscurity, I'm happy to make these songs available and reintroduce them. From garagey post-punk to atmospeheric spoken-word-space-jazz to minimal electronics to full-on dance punk, this record has quite a few gems. The two best (and two of the most different) songs are on the B-side. Menial Tasks is a frantic bass-driven danceable post-punk gem that takes it cues from Metal Box-era Public Image Limited and Entertainment-era Gang of Four, and after that song abruptly ends, its stylistic polar opposite begins: Julia, a largely electronic track, with back-and-forth synths and guitars. There is one thing that binds these two songs together, and helps retain some semblance of cohesion: the vocals. I described Tucker as being full of melodrama above, but the truth is that barely scratches the surface. His vocals range from gutteral growls to yelps to emotive squeals and completely change in speed and pacing and pitch often within the space of a single verse, sounding like David Bowie being exorcised.
This single record is a compelling example of the sheer artistic experimentation and musical genius that abounded in the early 80s, taking a huge array of styles and cramming them all into one nice, neat package with slightly mixed but thoroughly enjoyable results.
Plain Characters: Invisible Yearnings LP
1981, Abstract Records
A1 Affair 19.10.80
A2 Labyrinth
A3 Not for Resale - No. 2
A4 Zero Zero
A5 Fingerprint City
B1 O
B2 Menial Tasks
B3 Julia
B4 Counting Sheep
B5 The Four Lies
Click here to download this record!
Posted by goutroy at 7:20 PM 5 comments:

By request, here is the rare US compilation LP called Hit the Floor. This record was released back in 1984 on the Gender Records label, and contains eight tracks by four bands, all very much in the new wave/synthpop genre.
Alpha Bettys is the least synth-based of the bands; both songs combine female vocals with guitars or horns in a fashion that's a bit similar to Essential Logic. Their material is the least interesting to me on this LP, but the songs aren't bad at all, just not outstanding. Minks is a bubbly female-fronted synthetic pop band. Their sound is very minimalist but still unapologetically pop, but their songs (especially Surprised) are incredibly endearing.
Boys Say Go released a highly sought-after DIY 7" and a 12" in addition to their two songs here. Their two songs are well-produced, full-frontal synthpop. Their sound is commercial but still underground (if only because they're pretty much unknown), and the song "Do You Wanna Funk" demands repeated listens despite the obligatory cheesy guitar solo toward the end.
Of course, the real star here is Doppler Effect, who later released a 12" before evolving into the industrial dance band Workforce. There is absolutely no doubt that minimal synth and electro fans will go nuts over both of their songs here. Prisoner is a fast-based analog killer, with the electronics pushed to overdrive - wonderful danceable drum programs, gurgling synth lines and throbbing electronic basslines combine with the back-and-forth vocals to make a true electro-pop classic. By the time the end of the song comes up and all the elements mesh together, you wish the song would keep going for another couple minutes. The second song, Time Is Running Out, is complete synthpunk. It's bouncy and snarling and silly and has some of the greatest spastic punk-ish synth lines this side of a Units song.
So, this LP is completely recommended, in case you didn't catch that from the above description. Do yourself a favor and download this and lose yourself in new wave nostalgia.
V/A Hit the Floor LP
1984, Gender Records
A1 Minks - Dangerous
A2 Alpha Bettys - Symbol Of Love
A3 Doppler Effect - Prisoner
A4 Boys Say Go - Serious Cat
B1 Boys Say Go - Do You Wanna Funk?
B2 Alpha Bettys - Stare In Style
B3 Minks - Surprised
B4 Doppler Effect - Time Is Running Out
Click here to listen to this record!
Posted by goutroy at 8:57 PM 9 comments: 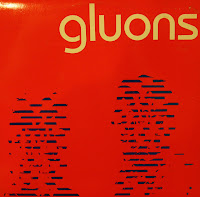 The first time I heard this EP several years ago, it was a cheapo record I picked up on a whim the middle of a batch of Amoeba Record finds that included a bunch of gems that I had been looking for for a long time - I listened to about 30 seconds of this, thought "Huh, OK, nice" and filed it away. It was not until I rummaged through my records I wanted to part with before moving to New York that I even gave it a second thought.
I gave it a good listen, and it instantly grew. It starts with the midtempo and spacey I Enter Your Void, which, although very repetitive, contained a mix of characteristics that made me love it. The guitars were dissonant, the drums steady, and the vocals almost in the glam-punk realm. The tempo practically doubles with Miami, which mixes more of the dissonant guitars with plucking basslines and more of the glam punk vocals. But the songs on side B are really the killer tracks. By the time A Room In Your Head started, I realized that the band's strongest point is the difficult ability to take dissonant and effected guitars and slightly snotty/arty but usually perfectly clear and articulated vocals and spin them into perfect dark pop. Your Manikin Hand drove this point home, sounding like a frantic version of Joy Division sans the studio atmospherics. This record is now one of my favorites. The band was from Massachusetts and I believe this was their only release. Perhaps, sadly, the city of New Bedford was not quite ready for their arty brand of dissonant new wave.
Gluons: S/T EP
1983, Self-released
A1 I Enter Your Void
A2 Miami
B1 A Room In Your Head
B2 Your Manikin Hand
Click here to listen to this record!
Posted by goutroy at 8:54 PM 7 comments: 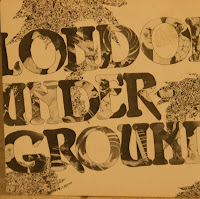 Here is one of my current favorite post-punk 7"s, from London Underground. This band later found themselves on Adrian Sherwood's On-U-Sound label assuming a full-on synth-dub sound, but on this record released on the Situation Two label (although it was produced by Sherwood), the band was loud and aggressive, very very VERY similar to early Section 25. The A-side features tinny guitar riffs, pulsing basslines, hard-pounding snare drums, and blasse reverbed sung-spoken vocals and could very easily have appeared on that band's Always Now album. The B side is guitar noise overload, reminding me of Fire Engines at their most raw and visceral. How this band took a complete one-eighty into dub territory, I have no idea. But this 7" is the one record of theirs that post-punk and goth and noise-pop fans absolutely need. It just realized this was recently shared on the excellent Lethal Injections blog, but I had it ripped a few weeks ago and figure I'll still share it as well - people need to hear this one.
London Underground: Train of Thought 7"
1981, Situation Two Records
A: Train of Thought
B: All Too Many
Click here to download this record!
Posted by goutroy at 8:50 PM 2 comments: