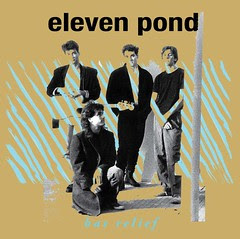 I've noticed some bickering and fighting and controversy among the music sharing blogosphere over the past few months. Some people hate the idea of sharing (for free!) this music, as it cheapens the experience of listening to the physical record. To that I say "pish-posh!" (and that's something I've never said before in my life...). Sometimes music blogs CAN make a difference.
For instance, a couple years ago I uploaded the obscure and barely-known LP from Eleven Pond. I occasionally saw copies for sale (I bought one from a local record store and one from gemm.com for mere pocket change), and after sharing the record, everybody wanted a copy. After a while, one of the original band members, Jeff, contacted me via my blog, expressing his joy that his music was reaching a wider audience, despite the fact that it was 20 years after the release, and in digital form only.
My friend Josh took note of this. He had wanted to start a record label for some time, and contacted Jeff to see if he would be interested in a reissue. As it turns out, he was very interested. After a slow start, the record was remastered by the legendary George Horn at Berkeley's Fantasy Studios. The record was given a new cover (the cover hat Jeff originally wanted way back in 1986), and every copy was silkscreened and hand-numbered for the perfect DIY touch.
This isn't just a minor reissue, it's a wonderfully remastered and lovingly crafted piece of music history. Seriously, this is how this record was meant to be heard. The difference is noticeable. The bass is deeper, the drums hit harder, the guitars are louder, the vocals are clearer, and the synths... whoa boy, the synths!
So... where can you get this reissue? Well, from Dark Entries Records, of course!
So, now you can witness how, with the right circumstances, some luck, and a whole lot of hard work (by people other than me), a simple blog post of an old, obscure, forgotten gem of a record can ultimately lead to a reissue. The original band makes money off the record that they never thought they would see, and they finally get the recognition that they deserve.
Posted by goutroy at 5:46 PM 12 comments: