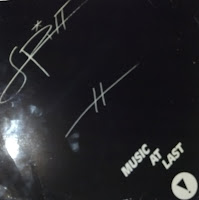 Spiff is on the way to re-releasing his music digitally! Check out this page for more info.
Posted by goutroy at 5:11 PM 5 comments: