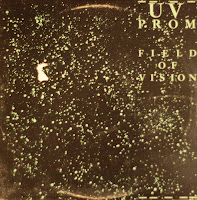 Sometimes it’s nice to just hear some good old-fashioned guitar-based post-punk. A record does not always need a lot of frills (or even a lot of originality) to be top-notch material. This record – the sole release by North Carolina band UV Prom (not to be confused with UV Pop!) is a perfect example of US post-punk done right. I’ve had this for at least 10 years or so and completely forgot about it until I found it stored away in my parents’ closet during a recent visit.

The band liberally grabs elements from UK luminaries like Echo and the Bunnymen, early Killing Joke, The Chameleons, add a bit of punk sensibilities (especially with the chanted "HEY"s in the first song - it almost reminds me of an oi band). They combine these elements on an excellent four-song one-sided 12”. The music is certainly familiar, and the band does not really take any chances or experiment too much – but in this case that works to the record’s advantage, as all four tracks flow together perfectly, and there is not a bad track among them.

It’s a shame the band never released anything else, as their imitation of their musical heroes is quite excellent. I believe this band has yet to be “discovered” by anyone, as copies still regularly float around online for pretty cheap.

Get it here! - new CLEAN rip courtesy of Frankie Teardrop at Systems of Romance!