As before, I also want to bring to peoples' attention an old post that may have been forgotten, neglected, or simply not discovered yet by the legions of newcomers to the music blog world. This week, I suggest going to the wonderful Phoenix Hairpins blog (which, in along with the Mutant Sounds blog, was my inspiration to begin ripping and posting my own records) and download everything that Curious Guy has posted in the past three-and-a-half years... starting with the complete discography of Kan Kan, the brainchild of one Patrick Dineen. From the humble minimalist post punk beginnings of his self-released debut 7" to the two later 12"s, his three records are pure darkwave perfection, full of synths and pianos and somber vocals.
Posted by goutroy at 11:26 PM 6 comments: 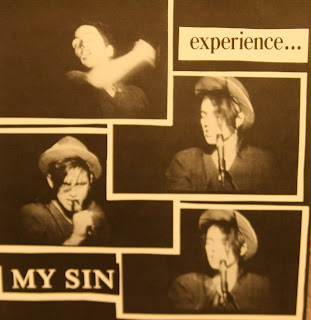 Well, I figured that if I'm going to post a rare SF female-fronted darkwave EP with tortured religious overtones, I may as well post the male equivalent! This is the 12" EP from one-man San Francisco band My Sin, self-released on Endless Music, as well as his debut (I think) 7", called Chains. The 7" has one song (You End Up Swimming) that is on the 12", so I've only included the exclusive track.
My Sin were pretty productive, releasing several cassettes (at least one of which had an accompanying book) and eventually a CD in the early 90s. My Sin is a mix of darkwave, deathrock, and synthpop on these releases. Using only bass, synths, and drums (no guitars, apparently), this one-man band created some dark, gloomy, angry, and lyrically quite bitter music. He starts with excellent covers of the Stones (Moonlight Mile) and the Stooges (I Need Somebody) on one side of the 12", and all other songs are his own. If you like your darkwave and deathrock infused with a good deal of melodrama, download this one! And if you have any of his other releases (cassettes or CDs), I would love to hear them! 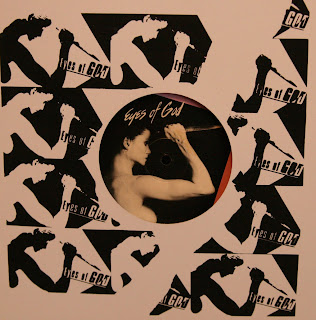 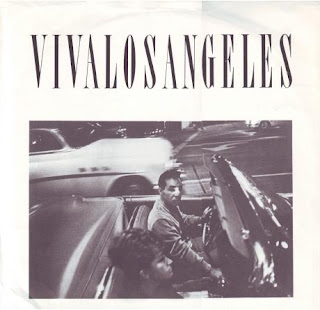 As a bit of a follow-up to Phoenix Hairpins' post of the Viva Los Angeles Part II, here is the first volume of this two-art series. It features a load of great underground Los Angeles bands (and comes with a huge, beautiful booklet with full artist bios... in Italian!).
The music here skews toward the dark and experimental side of the LA scene; my favorite are probably the Randall Kennedy and Reconstruction tracks (one of which also appeared on one of the Terra Incognita compilations on Auxilio De Cientos) - they are dark and full of keyboards, with both sung and spoken word vocals. Bay of Pigs contribute two of their typical darkwave-meets-bagpipes songs (seriously!), Carl Stone contributes an electro-acoustic track, and Savage Republic are probably the most well-known, still active today (in fact, I recently saw them perform as a live soundtrack to an experimental 1970 Spanish film - one of my favorite shows of 2009!).
Anyway, this is a truly recommended record. I did not include the booklet with this rip (I don't have a scanner), but I suppose I can take photos of each page if people are interested.
V/A: Viva Los Angeles LP
1986, Viva Records
A1 17 Pygmies - Chameleon
A2 Randall Kennedy And Reconstruction - A Rise From The Ruins
A3 Randall Kennedy And Reconstruction - Never Ending Night
A4 Randall Kennedy And Reconstruction - Heroin
A5 Carl Stone - Jang
B1 Bay Of Pigs - It's All Over
B2 Drowning Pool - Festival Of Healing
B3 Savage Republic - Exodus
B4 Savage Republic - Spice Fields
B5 Bay Of Pigs / Koichi Nagai - Prologue