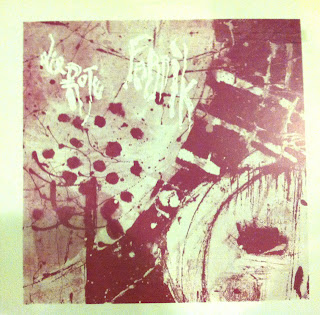 Here is a piece of Belgian darkwave from 1986 that has been long, long forgotten. Self-released and hand-stamped for an underground DIY feel, this is a record that is sure to please the hardened goth and DIY post-punk fan.
The record starts with the song “Murder”, which grows quickly from a few samples to a barrage of scratchy guitars and synth-drums start up, backed by a steady bassline. It’s a lo-fi but blistering goth track falls squarely between Screams for Tina and Section 25. “Give Me Your Love” is a much slower song that wallows in gloom and self-pity as the singer desperately pleads and begs for companionship. The song starts with a barebones structure of metronomic drums, single-note-bass, and lazy guitars until the last minute, when the guitar picks up, synths kick in, echoing the urgency in the singer’s voice. Side B starts with Pain, which features syncopated drum machines and layers of noisy guitars. Finally, the record closes with “Fast Living”, which is all stuttering drums and yelling vocals that compete futilely with a sheer wall of tinny no-chord guitar noise.
Two of the three members of Die Rote Fabrik later would later form Starfish Enterprises and add more electronics to their barrage of noise; later that group broke up when one of the members went on to record (quite prolifically) under the moniker Starfish Pool. The record is the one remnant of Die Rote Fabrik’s existence that I know of. It’s one of those records that feels a bit out of place – when it was released in 1986 it was too late to find an audience amongst its kindred spirits in the early post-punk scene; it was a bit too noisy to be popular in goth clubs, and it certainly was not poppy enough to garner any radio play. Hopefully people out there like this one… it has certainly grown on me. As an added bonus, a few copies can currently be found on discogs for relatively cheap! 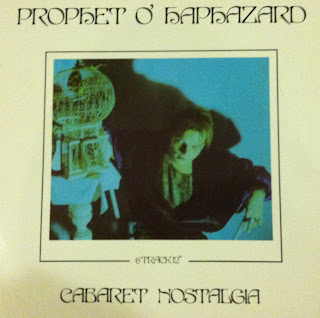 Here is the obscure second release from the somber German singer Prophet O’Haphazard, called Cabaret Nostalgia.I originally thought O'Haphazard was a girl, but it was actually the pseudonym of one  Oliver Gerling). His debut EP  - which is a must-have for underground synth fans - can be found on Capa Nostra Syndicate,  and is highly recommended.. The record’s album title gives a hint of what is in store on this record – gothic cabaret music mixes seamlessly with electronics and effected guitars and O’Haphazard’s wonderfully sullen, deadpan voice. At times his forceful but somewhat feminine voice recalls early efforts by contemporary artists like Molly Nilsson and Zola Jesus, but he’s less poppy than the former and more dynamic than the latter.
You and Me Covered in Silence plods along like gyspsy funeral parlor music, while Sum Up To Suicide is a beautiful mesh of aching synth strings, stabs of guitars and sparse drumming that sums up to one of the most bleak songs ever. Side B kicks off with Prophet O’Haphazard proving his bona fides with an excellent cover of Thomas Leer and Robert Rental’s Monochrome Days. Magic Mushroom Kingdom starts off aimlessly before it turns into perhaps the first gothic minimal synth-psych song, sort of like Astaron mashed up with Red Temple Spirits. Sadly, despite being about a Mushroom Kingdom, it does not mention Mario or Luigi at all.
Finally the album ends with a reprise of a song from her debut EP, Till I Hate You. Fittingly, this song is called Till I Hate You 2. You know, in case you weren’t sure he hated you the first time he sang it… well, he still does. Interestingly, while the title implies that it will be a bitter tirade against a lover who wronged him, it’s actually a slow, melancholy track with lyrics that drip with thoughts of heartache while the music retains an almost sweet hopelessness.