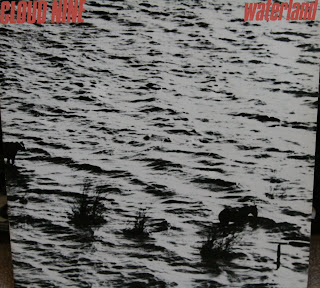 Here is an LP that is surprisingly unknown (it's not even listed on discogs), considering it was released on the venerable Ariola label. This is a Dutch band called Coud Nine, who played a type of synthpop that seemed like it was made for radio play. As such, there is a bit of cheese factor involved at times, but when the band gets it right - as on the wonderful electropop smash "Fraction of a Second" - they REALLY do it well.

Cloud Nine: Waterland mLP
1985, Ariola Records
A1 Blue Gardens
A2 Fraction of a Second
A3 Poison
B1 It Started When the Rain Came
B2 Waterland
B3 Wordporridge

Hi, thanks for your compliments on this record.
I am the singer/co-writer of Waterland and by the way working on a new project www.slowdisk.nl, p'etra.
Bye for now,
Petra.

Nice, glad to see you're still making music. Thanks Petra!

Hi,I am sure the next comment will come from the guitarplayer. :-) I am Puck drummer on Cloud-Nine's Waterland and together with Richard van Buuren Co-founder of Cloud-Nine.
Richard was the keybordplayer on Waterland and a very good friend as well. The early seperation of Cloud Nine was caused Mostly because of Richard's death :'( He died from a tragic accident in our practice room, a horrible story! Me leaving Cloud Nine before seemed all to be to much. I am proud we got signed by Ariola Records to be able to make this record. It was recorded and mixed in only six days :-) at the Soundpush studio te Blaricum. Thanks for all your compliments!
Appointment decent: Joery van Buuren the brother of Richard and until today a good friend is still writing songs like 'He' did in his "Cloud Nine". Away from drumming I own a small vintage recording studio called Pucksound close to the center of Amsterdam www.pucksound.nl
All the best! Puck

Oh Goutroy!
A real big big big THANK YOU for not only this LP, but for all your blog (I think one of my favourite ones).
And Cloud Nine makes me thrill all the time I listen to. It is so melancholic...

You make me life better!

figure8, what kind of accident caused richard's death?? im sorry for the loss of your friend, its nice to see band members appreciate the efforts of the bloggers and share with us some more info, thanks!

Richard fell through a glass window on the roof of our rehearsal room.
Richard died several days later in hospital. Time stood still. :'(

A Fraction of a second
The luck for which we pay
That's what we must cherish
Not the ages which are grey.

The Fraction Of A Second chorus is ingraved on Richards tombstone.

I still mis him as i am sure all of them who known him.

Yesterday went to see P'etra singer of Cloud-Nine of that time.
Bringing back memories like Diamonds and Rust.
Great to see her and hearing her singing again.:-)

Very nice mLP from this band I didn't knew. Petra's voice remind me a bit of Claudia Brücken. Thanks for your blog!

a big thanks to Goutroy for making this album available (I have the original LP but really wanted to this on my iPod) and an even bigget thanks to Cloud Nine for this sweet, moving album. Sorry to hear about the reasons for the early seperation.
Good luck to all of you.