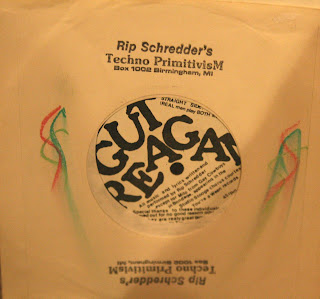 If you like your synths pushed to the very brink of sounding like they are going to fall apart, here is a treat for you. A guy from Florida by the name of Rip Schredder's recorded this 7" called "Techno Primitivism" in extremely small quantities. He also had Milo from the punk band Gay Cowboys in Bondage do backup vocals. The name of this record doesn't lie: This is truly primitive. It's not exactly "techno" as we know it (I don't even think that term was really used in the manner it is today, anyway) - it's pure noisy analog synth banging, knob twiddling, tinny synth percussion, and angsty talk-singing. This record is so amateur it makes Transparent Illusion sound like a night at the opera...