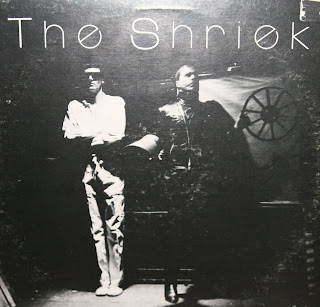 Here is a bit of an oddball record. It is the only release by Canadian electropunk band The Shriek, which was a duo consisting of Blair Petrie and Ben Gaylie, who later collaborated on a very underrated electropop/experimental album that you can find on Mutant Sounds. Before they delved into the realm of pure electronics, though, this duo made some very harsh, lo-fi, amateurish music as The Shriek... It starts out with the two most punk songs I have ever posted to this blog, All Fucked Up and Fuck Up. Judging by the names, you can guess how they sound, as well as their maturity level. But they are both great songs, and things get more artsy with "1980", a one-chord art punk spazout that sounds like Wire channeling NYC no wave. Side two is where the synths go into overtime, with "Lost Control", an amazing electro-punk song that reminds me of one of my all-time favorite bands, Lost Sounds. Kids is like a one-chord Wire song. The most bizarre song is Intermission, a sprawling electronic song that shifts from synths and vocoder to repetitive droney chanting from the point-of-view of aliens. And from the 2:35 point, you'd swear you were listening to a Transparent Illusion song (with loads of vocal effects, though). Overall, this is a very recommended record. I wasn't too impressed at first, but it slowly grew on me, especially side two. If there was ever a Canadian version of the Messthetics comps, this duo would be on it!

I think many noise musicians are keenly aware of dynamics and build them into their pieces.