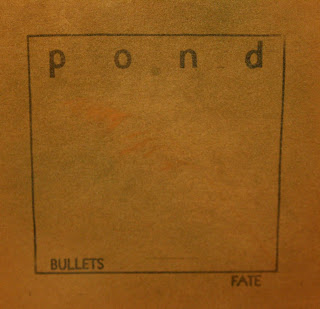 Well, it only makes sense that, for my 100-post (and roughly two-year) anniversary, I would share a follow-up to my first-ever post. Just a week ago, I was at my favorite local record store and noticed an album that looked oddly familiar. It was the same rough tan cardboard as the Eleven Pond LP. It was silkscreened. It was hand-numbered. The font was almost the same. And the band's name was POND... The credit insert confirmed what I was thinking: this is a pretty much completely unknown follow up to Eleven Pond's extremely sought after (and now reissued!) LP. After co-songwriter and bassist/keyboardist Jeff Gallea left the band (amidst quite a bit of tension, apparently), the rest of the band carried on and recorded this one last 12". I talked to Jeff at the Nina Belief/Ronin show at MRX last Saturday, and although he knew that they recorded SOMETHING, he has never even heard this! He's on better terms with his former bandmates now, and so this upload is as much for him as it is for everyone else. The 12" starts off with Bullets, which has great guitars, drums, and vocals, but the synths are quite cheesy sounding. Still, it's not bad. The song Fate, however, sounds like it could have easily have been on the Eleven Pond LP - it's just a bit more electro, and slightly better-produced, but otherwise sounds exactly like the Eleven Pond we all know and love. Plus, the lyrics and vocals are probably the best that James Tabbi ever recorded. This is a great 12" from a great band, and shows that they weren't even close to running out of ideas. One only wonders what other great music would have been recorded if they had kept it up...

You kick so much ass for this, Goutroy.

Oh my. I cannot wait to get home and give this one a spin. Over the past few years, us New Yorkers have really given the original Bas Relief record some serious love at both Wierd and my own night in Greenpoint, and that reissue is fantastic!

Man, what a score!

thanks for the good music

I went to MRX but didn't stay for the bands. They were supposed to start at 11:00 and by 11:45 I was kinda bored of the quasi-rave music they were playing. I hope you enjoyed the show though.

Thanks for the info, just found a copy online for around $6 after you posted this... now lets watch all the silly Europeans pay 3 digits

Lmao,you would be way far better visiting some record store here in Europe,
although you'll have to pay for exchanging your $ to euros first... ;-)

Good stuff, exactly as you say.

Sad you have such stupid people here to comment. How primitive can one get to call Europeans *in general* silly? No, please no discussion about this. I'm German by the way. Just love the music.

YES! It's always great to hear more material from them, I can't believe this flew under the radar for so long.

Goutroy - an amazing find. I'm from Rochester and remember hearing "Fate" on local radio. Had completely forgotten about this song.

It is an extraordinary record, it is one of my favorites, I think this is the only original CD that I have.

I suppose that the original post-punk movement ended as the bands associated with the movement turned away from its aesthetics, just as post-punk bands had originally left punk rock behind in favor of new sounds