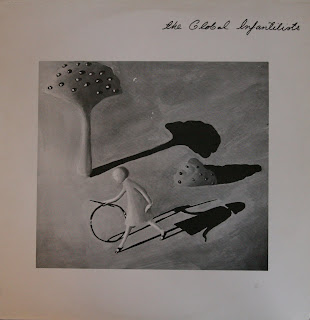 Global INtantilists were a goth/new wave band from Sweden that only released two records in their brief life. This selftitled album is their debut. One of the primary members was Mare Kandre, a writer who ultimately decided to dissolve this band in 1984 to concentrate on her literary craft. At 22, she released her first book, I ett annat land, which resulted in her being hailed as a genius; she would release several more books, many influenced by gothic fiction. Sadly, she died at age 43; it is largely believed to be suicide.
This group is where Kandre honed her writing - the lyrics are dark and gloomy, and the vocals are full of melodramatic shrieks and cries, sounding like Siouxsie Sioux if she was a drama geek. Apparently the band's second album is more straight-ahead synthpop, but this album is the perfect mix of doom and gloom and guitars and artiness and synths. This is the UK Abstract Records release, which had an extra track that the original issue did not have.

Global Infantalists: Selftitled LP
1983, Abstract Records
A1 This Music
A2 Passing
A3 Leaving
A4 Remain Untouched
B1 Crystal Ship
B2 An Inch Of Nothing
B3 The Flight
B4 The Garden

Thanks for yet another rarity, and thanks as well for giving the history of the band-- what a sad and unusual story.

thank you very very much. i have been looking for this for years.

Eventually, when L gets back from LA, we must have dinner with your records...I am quite interested in the stash that you have in this apartment of yours. I hope things are going well with you...Im grabbing your Parchment Paper files as we speak! :)
(aka- Lorelle)

So many lovely melodies / arrangments throughout this album...love it! Thanks!

Hi. You had a great blog! Here´s Swedish interview from the 1984. Nice kind of gloomy atmosphere - and those piano tunes..

Hi I am v e r y interested in her
story. Pls contact me @nindhl@netscape.net
Look foward to it. Thank you!
peace

in fact the cover of the disc is soo bright, soo original, in my case I really like the music of this band is diffent and unique.

Hi, I am Sven Ohlman playing the bass in Global Infantilists. Mare was a true genius, and I miss her a lot. If there is anything you want to know about the band or the records please let me know. I'll drop a line...