THE COUPE DE VILLES: Waiting Out the Eighties LP 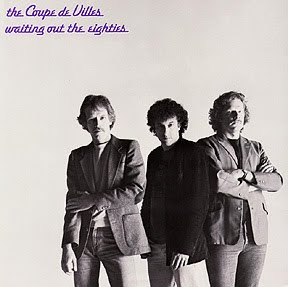 The term "holy grail" gets thrown around a little liberally these days when referring to synthpop and obscure 80s records in general. I remember seeing this one described as a "holy grail", and while there may be reasons to apply that term to it, the music is probably not the first reason for this. That's not to say the music is necessarily bad - it's just very much a product of its time, and has not aged particularly well. I decided to share it because I know that a LOT of people are very interested in hearing it. The album will remain a desired curiosity because it is legendary director John Carpenter's band; he is joined by Tommy Lee Wallace (forever known by horror fans as the man who created the incredibly creepy mask worn by Michael Myers in Halloween), and Nick Castle, who actually got to wear that mask as the creepy villain. Further ensuring its status as a rarity is the fact that it was never actually commercially released - it was ONLY given to friends and family. I wonder whose copy I have here?
As a band, the trio is best known for performing the theme to Big Trouble in Little China. Unlike the other actor-cum-musician record I posted a while back (13 year old Ben Stiller's wonderfully amateur electronic band Capital Punishment), the musicians in The Coupe de Villes were professionals using professional equipment, approaching their craft with a safe pop-rock sensibility rather than experimentation. As a result, the music is the kind that could ONLY have been made in the mid-80s - synth-heavy fare with a few good standout songs (the title track is particularly fun, and I'm always a fan of 80s songs that are referential to that decade). It's a curiosity and a relic, and should be approached not as the next lost synthpop classic, but as an obscure release of heartfelt pop music expression by a trio of accomplished horror and action film icons.

HI,
I really want to listen this, but the link is not good.
Thanks for your amazing blog.

Yeah, the link leads to the Justine 12".

Oops! The link has been fixed. Thanks!

Thanks for fixing it, the album is very enjoyable!

I would kill for your copy ^^

Do you sell it ? (it's a must have for all the Carpenter's fans)

By the way synthpop received criticism for its limited and artificial sound and for its associations with alternative sexualities.

Just wanted to say thanks for the download link - have been looking for this for a while. I have had Waiting Out the Eighties stuck in my head for the past week...

Thanks so much for posting this!

Thank's a lot for the link! That's awesome!!!