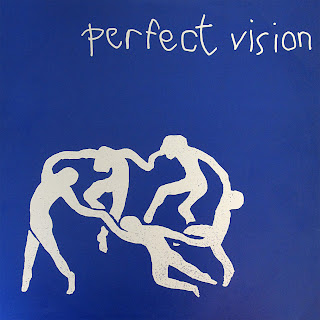 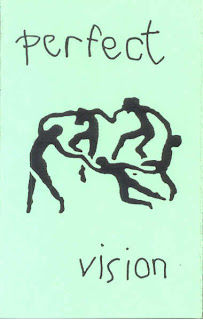 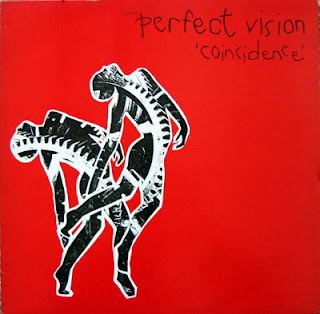 Well, my earlier post of Perfect Vision's Tongues Out mLP caught the eye of the band, and the synth player & singer (and sleeve designer) of the band, Steve Xerri, gave me recordings of all of the rest of the band's output and asked me to share them. He also geve me a bit of info about each release:

First off is the band's debut EP, ...Our Broken Crown... It was released by Backs and recorded in various studios: Hamster Studios was
a friend's home-based set-up (and the track recorded there, Drive Me,
was the first one John Peel played). Hyperion Studios was owned
by hippie band The Enid, and Spaceward, where Laugh At
Breakage and This Hook were recorded, was the haunt of The Stranglers.


The demonstration tape was recorded mostly on 4-track (Portastudio) in rehearsal rooms, friends' bedroom studios, etc. All the material was laid down before the band released anything on vinyl through Backs. The artwork is from an inlay to the cassette. Repetition is a Bowie song, the rest the band wrote themselves. At one time the band would open their live set with the song Great Figure, its long taped intro, complete with clarinet, played in the dark before they went on stage - heady stuff! It was released on In Der Tat Records and originally distributed by Peeved. Special thanks go to Steve Hartwell, who ran Peeved and was very generous in letting the files be shared.

The Coincidence 12" was financed by Backs; they were all recorded at
Spaceward studios.

If you like the Tongues Out mLP I posted a while back (or, hell, even if you don't), download these here. This is a truly underrated band who played some of the best minimal synth, new wave, electro, and post punk songs of the early to mid 80s.


Demonstration single-sided tape
1985, In Der Tat Tapes, originally distributed by Peeved
A1 Play Red
A2 Worksong
A3 This Hook
A4 Bite The Bullet
A5 Repetition
A6 Labour Like This
A7 On Edge
A8 Great Figure

Welcome back, nice uploads as usual.

many thanks to the band who kindly share their songs with us, very sweet, and thank you viable commercial, your blog is one of the best!

This is truly fantastic and unique music that deserves to be heard. I haven't had the chance before, so thank you very much, Goutroy! And thank you so much, Steve, for this music! You made my day!

The more I listen the better it gets which is rare to me! What great tunes and what a great voice. Would love to hear those songs mentioned in discogs that appeared on the compilations "Reynard The Fox", "Another Spark" and "Tons Of Fun". Anyone?

Perfect Vision were very much the best band in town when I lived in Cambridge in the early 80's. It was a priviledge to witness their evolution and many live shows during my 5 years in the city. One recollection was my first encounter with a very early version of the band, then playing a popular basement bar with a live drummer! (he didn't last long, the band quickly moved on to using a reel-to-reel backing track for live shows). Later I also got to a few of their shows on the road, notably a performance at the Beatroute Club in Soho's Greek Street, a venue well known as the spiritual home of the New Romantics including Spandau Ballet!
One point I must make was that it was (and remains) so rare to find a band blessed with TWO great singers. The voices of Jon Lewin (voice & rhythm gtr) and Steve Xerri (voice & electronics) were both so rich in tone yet with quite distinctive styles. Im also delighted to be the proud owner of at least 6 official cassette releases featuring the work of the band (some are compilations to which they contribute just a few tunes) including a retrospective collection of previously unreleased tracks and out-takes on which some amazing ideas and clips can be found. In conclusion I'll mention just a couple of random recollections:
Not many bands are sufficiently disciplined to include band aerobics sessions as part of their rehearsal routine and finally I remember Jon mentioning to me on one occasion that he thought the band had written and demo'd around 81 or 82 songs! These guys knew what they wanted and worked so very hard in trying to achieve it!

with best regards to the guys (james, giles, steve & jon) from nick gough (still very much a phototakerguy and occasional tour manager on the underground live music scene - check my blog & galleries on myspace - there i disguise myself as 'boundlessenergy')

For more information on the tape releases please see http://www.peevedrecords.co.uk/peeved.htm.

The track on the Hypertonia compilation is Angelfull (from the 'Out' (PV027) tape). The Another Spark compilation contained 'Empires and Ashes' (also on 'out'). The In Der Tat tape Reynard the fox contains Clockjacks which is on the compilation 'If You Can't Stand The Beat' PV024.

and this cover say you the name of the disc, the perfet vision is one of the best disc of this band, I hope that someday come a new album from this band.

I've never heard this band, But I think they are really good, I used to hear another kind of meusic,but I THINK this IS more amazing than any kind of music.thanks for the site,for me it is really good to know new bands here.

Many thanks to you & your blog and to Steve Xerri from PERFECT VISION for sharing their works!!!
it's too rare and it must be said!