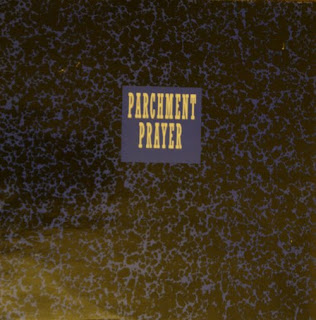 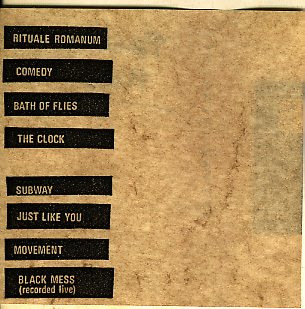 I wish I could give some sort of background or detail about this release, but the truth is there is simply no information to be found. None of the band members are named (not even on the lyrics sheet). I don't know what else this band released, but I have this LP and a cd-r of their demo tape. The band was from Germany, and was part of the darkwave/goth/deathrock scene there. They released their selftitled LP on Independance Records. Musically, it recalls everything from Joy Division to Christian Death to South of No North to anarcho post punk and punk bands like Lack of Knowledge, The Ex, and Crass. It's sometimes aggressive, sometimes melodic, and always quite dark (except on the kinda lame "Children", with its chorus of "Take Care of the Children... Children... Children...". I mean come on, that's only a few steps away from Whitney Houston's "Greatest Love of All". Ugh.) But aside from that misstep, the LP is great, with songs like This Love Lost and Comedy sounding like long lost classics. The demos are even better, in my opinion, except some of them aren't the greatest sound quality. A huge thanks to anonymous (was it sorrow-vomit?) who informed me about the demo songs: they were on a demo tape that the band released in 1985, limited to 100 copies. The image of the cover comes from sorrow-vomit. I didn't name the songs in the .zip file, but have included them here so that you can change them accordingly.

Hi, I downloaded your demo tracks and this is their '85 S/T demo tape that was limited to 100 numbered copies. A friend of mine purchased this cassette 2-3 years ago from a German seller on Ebay and luckily made me a copy.

Thanks so much! I got the songs on a CD-r someone (I wish I remembered who it was) made me several years ago.

I have that demo tape at home on my desktop, actually. Something I planned to rip for my blog. The cover is parchment paper with the band name and a blood splatter ink and is all done by hand, excepting the tracks being cut from a printed photocopy. I'll post scans of them over the weekend.

I too know NOTHING about the band, but had a fellow in Germany rip a cassette copy he made of the album for me a few years ago. I got my tape (which is #15, I believe) from Wayne of Garten Kirkhof.

Would you mind terribly if I post the demo with the tracks tagged, along with my cassette's artwork on my blog? I'll point people to yours and credit the source.

Of course Fritz, that would be fine.

Hi, just by accident i've seen this blog about Parchment Prayer. Funny, People are interrestet in this Music which is over 20 years ago. Shortcut: I was fonder and member of the group and naturally able to give further information (after visting a few boxes at the cellar).
Please let me know, it's a pleasure for me.

Chris,
I'd be very interested in hearing from you as well. Band history, photos, and information at all.

I posted mirrors to the demo here:
http://fritzdiesspinne.blogspot.com/2008/09/fighting-spirits-of-will.html

I am proud to own the actual demo tape, but never got the LP. Thank you for the sounds!

please give me a few days to collect the information. Must find something like a press info.
Try to google, you'll find also two sampler and a little information.

Once again Chris: How did the Cassette come from Germany to NYC USA? Incredible!

Respect for all the nice links you keep on posting on you fascinating and interesting blog. Its one of my favourites and I keep on looking to it frequently. Also this one Parchment Prayer again is great stuff !!

But the Link doesn´t work very well, am I right? I guess the archive must be somehow corrupted if im not mislead in my interpretation ...

I got the demo from some other site but would be really keen to listen to the sound of the ripped LP.

Thank for this!! I really appreciate it, i enjoy it a lot.

I fully agree with anything you've printed here.