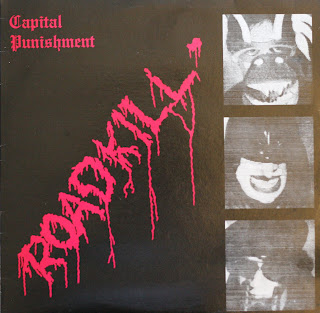 What do you get when you cross the child of a famous comedian, the fertile New York no wave scene, and a few hundred dollars to record and release an album? You get Capital Punishment's album "Roadkill". Not to be confused with the hardcore band of the same name, this was a minimal electronic/no wave/retardo band from NYC in 1982. And the drummer/backup singer was none other than Ben Stiller. That's right, Zoolander himself was a wee lad of 13 when this album was recorded. And while the music here is amateurish - VERY amateurish at times - you have to admit that it's pretty damn cool for a high school freshman's band. I mean, what did YOU release when you were 13? I know that awkward point of my life consisted of Star Trek: TNG, Super Mario 3, and my dad's hidden stack of Playboy magazines. I certainly didn't have time to do anything creative.
So listen to this record with a grain of salt. There are some stupid no wave songs, some decent minimal electropop songs, and actually a couple great electronic instrumentals: especially the epic "John's Forgotten Lands I, II, and III", which use every synth noise in the book. It's a curiosity, a strange amateur classic, and often a very enjoyable listen. Unfortunately, the group never recorded anything else, and the short-lived genre of Stillerwave never realized its full potential.

Download the LP here!
Posted by goutroy at 11:25 AM

Even just as a novelty item this has to rate way up there.

This is way better than I would have expected. Thanks.

Thanks for the kind words. Thirty years ago, our peers weren't quite as nice to us when we shared Roadkill with them. Everyone was in to the Stones in our school then, so Ben and I got a lot of "what is this shit?" from our peers when they heard Roadkill. Glad to see that some sentiments mellow with time.

Regards,
Kriss
(the one wearing the bird mask)

Thanks so much, Anonymous! Do you remember any other info about the band... like how many copies were pressed or sold, or if you guys ever recorded or released anything else?

when is there going to be a reup for this?

can someone PLEASE reupload this file? i really want to listen to it!