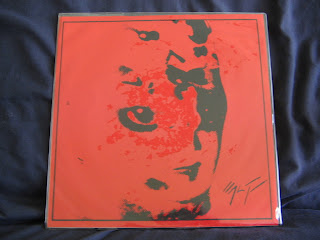 Here is a EP (and perhaps the only release) from a San Francisco band called Modmach. Sure, you most likely have not heard of them (they seem pretty much hopelessly obscure), but they actually had their roots in the well-known (in underground/indie terms, at least) San Francisco minimal synth band Units. Richard Driskill, Ron Lantz and Alex Rudis of Units split the synth band before the recording of their Digital Stimulation LP to form ModMach in 1980.
There is really no information to be found between the formation of the band and the release of this record a whole five years later in 1985. Did they release anything else in between - a demo tape, a 7", a reel-to-reel? It appears that Ron Lantz left the group before this 12" EP was recorded. This was self-released on the band's Oddernmart label, and came packaged in a foldover plastic sleeve with a cover insert and credit sheet. Thanks to Stephen from Obscure Records for the photos.
The music here is decent synthpop/new wave - it's definitely not as great as the classic Units stuff, but it's good.

this link is bunk YO..

It works fine for me... Zshare's been having some problems recently, so it may have been temporarily broken.

I like this alot. Definetely not the units, but I think whoever tehy were that they held their own :) Thanks