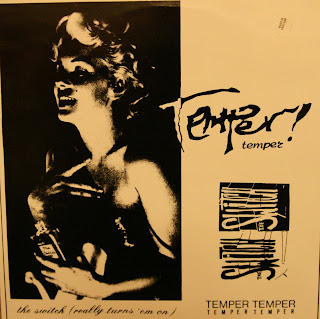 This record here is a 12" from the UK, presumably self-released on the Sheer Bravadol label, by a band called Temper! Temper. This trio recorded this 12" and a 7" (of the same songs), and then disappeared. The record received some distribution by the Cartel, but it still remains a pretty obscure and unknown 12". Their blend of synthpop, goth, and new wave is infectious - The Switch could have been a huge club hit, similar to bands like New Order and Information Society, or a poppy version of Sisters of Mercy. There's a bit of cheese factor in the vocals and guitars (this was the late-80s, after all), but the songs handily escape the late-80s dreck by avoiding slick production and bad balladry. Body Blows is a particularly beautiful song, with simple guitars, warm lush synthesizers, and (depsite being called an instrumental) ethereal female vocals in the background. This is pretty sought-after these days, so I thought I would share it for all to hear!

thanks you for sharing this one..i like this band

I believe everybody should browse on it.