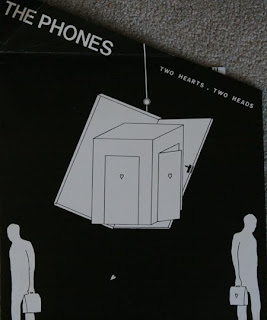 There are some LPs that don't impress me too much upon first listen, but eventually grow on me the more I listen to them. This debut album by Dutch post-punk band The Phones is such an album. The first time I heard it, I thought it was good, but there weren't any tracks that stood out too much. Still, there was something there - something about the album made me listen to it again. And then again. And now, after many, many listens, I have no idea how I was not immediately in love with this album. It's a perfect combination of jagged guitars, dark synths and organs, powerful and perfect vocals, loud drums, and simple, repetitive basslines; an excellent mix of new wave, darkwave, pop, and electronic; a great blend of many influences, from fellow Dutch post-punkers Mecano to Joy Division to Television to Modern English to the Thomas Leer/Robert Rental LP. The A side is a bit spotty at times, but has the excellent instrumental minimal electronic song "*" (yes, that's the full name); the B side is solid throughout. THe final two songs, Cities and Comme L'Amour, are both masterpieces in my opinion. These are songs that would would be lauded and raved about by hipsters and indie journalists as the next big post-punk revival band if they were released today - they have aged perfectly. The synths and bouncy chorus in Cities and its long instrumental outro, and the abrubt start-stop-start-stop of the beginning of Comme L'Amour, have driven me to listen to these songs dozens of times. Not only is this self-released album a lost classic, but the packaging is great - it comes in an oversized quadrilateral sleeve, with a hand-cut dust jacket (which has a stamp that says "hand cut" on it, to authenticate the DIY-ness of it, I suppose). This is an album that deeply rewards repeated listens. And even if I'm the only one who loves the album, I still want to share it, as it is exactly the type of album that I created this blog to share.

You are right, this is really good and I had never heard of them. The voice is quite unique, the singing very emotional in a convincing way. Just listened once, but I can imagine this one's a grower.

Unfortunately, with "Change" there is a recording mistake at 1:54. Your rip? Could you do that track again?

Anyway, thank you for sharing the music and your enthusiasm!

I totally agree. Bought it couple of days ago in Amsterdam, this is a brilliant album.

So could you rip that track for us? Would be great.

I saw a lot of helpful data above!