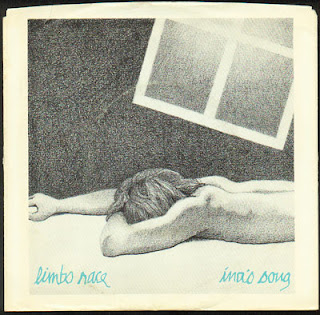 Here is the entire vinyl-based discography from Boston post punk band Limbo Race. They released two 7"s, three songs on regional vinyl compilations, and two songs on radio tapes that I've never heard. Stylistically, the first thing that comes to mind is fellow Boston band Mission of Burma, but there are quite a few similarities to Gang of Four and The Cure, especially on their second 7". Lyrically, the band is as honest as they are bleak; one listen to their dark synth-heavy masterpiece Ina's Song or their gloomy Down and Backwards will let listeners know that the singer is not hiding anything or holding back. Wikipedia has a great bio of the band: 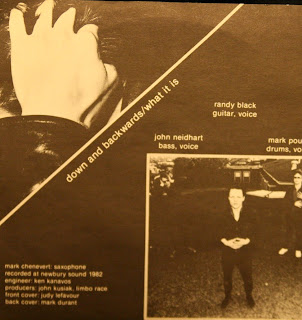 Limbo Race played their first show in 1980 at the legendary Underground, a rock club in Allston, MA, notable for being one of the first venues to feature acts from the burgeoning post-punk and experimental music scene in Boston. For two years, the band played in other small Boston and Cambridge venues including Cantones, Mavericks, The Rathskellar ("The Rat"), The Club, the Inn Square Men's Bar and in alternative venues along Thayer Street in Boston's South End. Among the many Boston bands that Limbo Race shared bills with were Someone & The Somebodies, Mission of Burma, The New Models, V;, Art Yard, The Neats, The Proletariat, The Neighborhoods, Lou Miami & The Kozmetix, Native Tongue, The Young Snakes, 'til tuesday, The New Models, and The Del Fuegos.
Drummer Peter Keaveney left the band in early 1981 and was replaced by Mark Poulin. At this time, the band recorded their first tape of the song Cigarettes which received airplay on the MIT radio station WMBR as well as on WERS from Emerson College.
In 1981, the band caught the attention of producer and engineer Dan Salzmann who brought them into the studio to record a song, There Goes Kafka, which was included on a compilation of Boston-area bands called A Wicked Good Time Vol.2.
In early 1982, the band added saxophonist Mark Chenevert and recorded their first single, Down & Backwards b/w What It Is, which received airplay on the commercial radio station WBCN. The band began to receive media attention and was invited to play at the 1982 WBCN Rock & Roll Rumble which they went on to win. Interestingly, Limbo Race was not included in the list of bands originally invited but as an alternate; they entered the competition only when another band had to drop out.
The band was picked up by manager Jim Coffman, who also managed Mission of Burma, and began playing shows throughout the northeast including the famed CBGB in New York, the 9:30 Club in Washington DC and other venues. In 1983 they also opened for the Thompson Twins and Echo & the Bunnymen at the Channel in Boston, as well for R.E.M. at Streets in Allston. Beyond Limbo RaceIn 1984, drummer Mark Poulin left the band. After attempting to find a new drummer and carry on, the remaining members of the band decided that the end had come and disbanded in the spring.
Randy Black went on to form a new ensemble called Dr. Black's Combo which also included saxophonist Mark Chenevert. He also has a lengthy career as a solo artist playing primarily acoustic and recorded a critically well received CD Below The Tapering for Waterbug Records.
Bassist John Neidhart continued playing in numerous Boston-area bands that included The Wickermen, The Sextons, Stardarts, and Jack Frosting.
Mark Chenevert continues to perform as a respected clarinetist and sax player and has played and toured throughout the United States with bands that include Hypnotic Clambake, Chandler Travis, Stone Lily, and others.
Mark Poulin continues to perform as both a drummer and guitarist, notably in a tribute to Roy Orbison.

You had me at Mission Of Burma. Now find me bands that sound like fellow Bostonians Moving Targets and Ben Deily-era Lemonheads!

Thank you SO much for posting this; I was a veritable Limbo Race groupie, and lost their vinyl years ago. Whew!

My mom always talk about limbo Race, I've never read something like this. I want to know about the lyrically that you mentioned above in the little article, sounds interesting.
Viagra Online Cheap Viagra

Amazing. Thank you so much for this. I remember Mark Parenteau playing Down and Backwards/What It Is when they won the Rumble. It was a religious experience. For my money they kind of blew away the entire scene including Mission of Burma. Gotta find those two radio songs. So sad that their entire recorded output is less than half an hour!

Thank you, thank you for sharing their music. I have the 45 of Ina's song that you posted, but I don't have a turntable any longer, so this is a wonderful gift to share. I used to go see them all the time at the Inn-Square Men's Bar before their sad demise.

Well, I found this blog by casualty and I recently came across your blog to learn more about this same issue, but I won't stop my research because I need even more information about it. I think I will leave my first comment: if you can add even more items about The Cure I'm going to put this blog in my wish-list. Absolutely. j23j