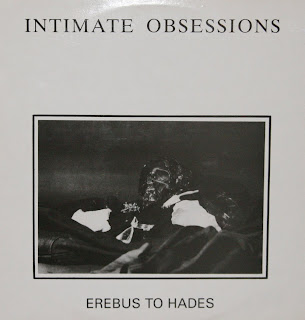 Here is an obscure early Third Mind Records release, from a UK band called Intimate Obsessions. Mixing darkwave, industrial, and post punk, these guys helped, in their small way, in creating the typical Third Mind Records "sound". Dark, moody, spooky, and very synth-heavy, this is a true gem that deserves to be heard. And just try to listen to "Assassin" and NOT bob your head and start singing along. With samples from Kennedy's Assassination, a driving bassline, and a chorus that will make you pump your fist in the air, it should have been a hit...
Intimate Obsessions: Erubus to Hades mLP
1985, Third Mind Records
A1 A State Of Mind
A2 Death Con
A3 Erebus To Hades
B1 Assassin
B2 Andante Con Moto
Click here to download this record!
Posted by goutroy at 10:07 PM

So nice ! many thanks anybody have the 12" Intimate Obsessions - Assassin.
That will be so cool

Hey--you've been busy! Thanks for the shares.

I am posting some again, slowly....