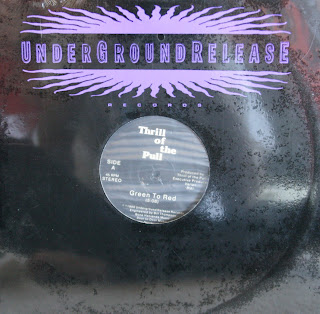 For all of you who really wish that Killing Joke would record a song that sounds exactly like their early-to-mid-80s heyday, here you go. Green to Red basically sounds like it could be on Night Time, with vocals that sound a bit like Mark Burgess of Chameleons. The B side is even more Chameleons-like. I can't really fault a band for sounding like other bands I love, though. It's derivative gems like this that make scrounging for unknown records worth it! All I know about this band is that they released this one 12" on Underground Release Records in a die-cut sleeve that made it look like some random rap record the first couple times I saw it. They were from San Francisco, and I think one of the members may have been in Fade to Black, a SF deathrock band from around 1984-85. I'm not sure, though.

Thrill of the Pull: Green to Red 12"
1986, Underground Release Records
A1 Green to Red
B1 Everlasting Dream

I think I vaguely remember Fade To Black from my days on the SF scene, but I don't know their music at all. Thanks for the share.

This actually came out around '87 I believe. There is a live to 2 track we did that's even better in my opinion. Green to Red was written in a 20 minute blaze of creative glory as was most of our material. There was an amazing energy that surrounded us at that time that burned fast and bright! We were right there...

Thanks so much for the extra info Stephan! You don't happen to have any of the other material you recorded, do you?...

I knew Scott, the lead singer of Thrill of the Pull in San Fransiscos in 1987. He was seeing my best friend Tracy who now is married to Garry Jacoby (Celebrity Skin).

I saw Thrill of the Pull at the Mabuhay Gardens open for The Lords of the New Church. I flew down to SF from Seattle to see the Damned at the Filmore the same weekend.

I have some great old photos of Scott (singer TOTP)and he is connected to me via MySpace. I also have an old cassette tape with 8 to 10 songs on it from that time period.

I later moved to SF in 88 and Scott was living with me and Tracy off of Haight St. in a flat on Lassat off of Filmore.

Scott and I had some wild nights doing speed while Tracy was off in L.A. on weekend trips.

I LOVED this band and wish it was available digitally. My tape is so trashed I doubt its worth it to try and digitize it.

Hello...Brad here - Fade To Black singer/guitarist...watch for full length cds by both Fade To Black & Thrill of the Pull on my new label,Tenderloin records,in Sept. Both bands will be playing live then as well.
ps - Scott,singer from TOTP,took my place in FTB when I left in '84.

Great stuff!!! Now I wish I had gone to the show tonite! ahhh well....

I read so much useful data above!