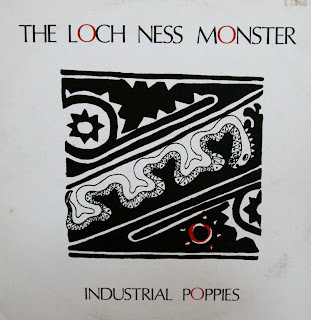 I had no idea that ol' Nessie actually recorded an album, but here is proof that not only does he exist, but that he also knows how to use a synthesizer! Which is odd, since you would think that using an electric instrument in a lake would electrocute the poor monster.
Regardless of whether or not he was shocked when making this album, this 1985 record is a strange gem of electro-pop. In fact, it actually walks the line between electropop and industrial quite well. Perhaps this is early industrial dance? At times, it really reminds me of Gelatinous Citizen (whose sole album you can download from Mutant Sounds here.
It also has some sax, pianos, and an experimental bent on several tracks on side 2. I believe it's the work of one guy (or lake monster) from the UK; it was released on Hamster Records (cute!), with silkscreened covers, and no liner notes and minimal credits. So it's a bit mysterious, and definitely worth downloading.

The Loch Ness Monster: Industrial Poppies LP
1985, Hamster Records
A1 Cut Me Down to Size
A2 2D Sex
A3 Plastic Baby
A4 Renoir's Mother
A5 Mind the Gap
B1 Mobo
B2 Christmas Again
B3 Time Base Corrector
B4 Paint he Dado Red
B5 Nightmares

I like this alot. I does remind one of the g.citizen, or perhaps some of portion control. Thank-you for this.

Nice blog ... but where is the "Look What's Coming To The Surface" comp. lp ? Has it been eaten from the monter of Loch Ness or what ?

I am just listening to the wonderful comp "Look What's Coming To The Surface". When looking for your info I discovered you deleted this entry -- why? Anyway, I love this compilation! Thank you.

That's weird... initially the link to the .zip file of Look What's Coming to the Surface was deleted by zshare; I uploaded it to mediafire and a few days later the netire post was removed! Nobody contacted me about it at all. Apparently someone who was on the compilation does not want their music shared. It would be nice if they actually told me, though, and asked to have it removed.

Strange. Lucky me I downloaded it immediately.

funny to see other people like this too - i'd recommend you to watch out for their second album entitled "mosaic 44", which at least i like better.

June 29th 2010, Rome
Great works of art
Andrea Dipré, famous art critique with Antonio Prospero, CEO of the Escher-
Nessie association.
Welcome to you all by Andrea Dipré, presenter of the program The Great Works
of art. The subject of today’s program is a drawing of exceptional and
fundamental importance due to its artistic value by the Dutch graphic artist
and engraver Maurits Cornelis Escher who, with his genius, tackled the
geometrical representation of art.
One of his works was found by chance a few years ago, stashed away for decades
in an old and forgotten garage in a small village in the southern region of
Campania. This work is of extraordinary importance.
Escher was loved by scientists, mathematicians and logicians. The work is
dedicated to the myth of the Monster of Loch Ness known as Nessie.
The picture is held together in a wooden oak frame and depicts a mysterious
figure playing a fife who seems to be enchanting the sea creature with his
music.
Here you can see a life-size photo of the original, which is well hidden in a
secret location. On the back of the picture there is the signature of Escher
himself as confirmed by a scientific study of his calligraphy.
The work is a charcoal drawing measuring 53 cm x 42 cm. This extraordinary
piece of art was found, as said above, by chance by policeman Raffaele De Feo.
The calligraphy and signature have been officially recognized. The work is of
amazing importance also due to the sightings of the Monster of Loch Ness which
began in the 1930s.
The work was given to policeman Rafaelle De Feo’s mother and brought to Italy
a few years later to Volturara Irpina a small village in the southern province
of Avellino . Escher managed to represent the essence of Nessie. Here is the
life-size photo of the picture. You can contact the owner or Mr. Prospero for
more information, and have the chance to see the original which belongs to myth
rather than history.
The work, I remind you, is an Escher, the great Dutch artist who was born in
1898 and died in 1972. Mr. Prospero is also working hard to make the piece of
art obtain the recognition it deserves. It has already had great success by a
vast public, but my wish is for it to obtain even larger and wider popularity.
Thank you.

The moon is well visible high in the dark sky which reflects its yellowish light on a waving sea. From underneath this mass of water emerges a monstrous creature.
Nessie
The famous Monster of Loch Ness emerges from the water by the music plyed by a mysterious faceless flute, or fife, player.
The faceless player shows no human features, such as nose, ear or left eye.
On the left side of the picture rises the mysterious creature known as ‘Nessie’. Its body is easily visible in the centre-left part of the composition, with its long neck coming out of the water turning its head towards the player. Nessie shows the right side of her face and large horns under the moonlight. Both figures are encircled by a mysterious halo which gives them a saint-like appearance.
The picture gives us the idea that Nessie will not emerge from its hidden waters if not called by the mysterious flute player. Such as the harp, the flute is considered an instrument played by the gods.
At the back of the picture on the upper left side we can see a dedication from the famous Dutch graphic artist and engraver , M.C. Escher 18.01.49.
On the lower right side, the signature of the artist, with the cataloging or number of registration.
The frame is in oak, 42cm x 53cm
http://www.eschernessie.it/

I Blog therefore I AM said...

How strange to find a copy of 'Industrial Poppies' online after all this time. My colleague Martin Howells aka Nils Phlamethrower and I, Steve Elsey aka Steven Plesiosaur recorded this and Mosaic 44 between 1984 and 1986. These were released by Terry Burrows (see http://en.wikipedia.org/wiki/Terry_Burrows) on his record label, Hamster Records. We have continued to work on interesting projects with various artists. Martin and I have recently completed 2 new tracks under The Loch Ness Monster name which we will release in due course. These will be the first for 20 years I think. I am working with Tonesucker (see http://www.onoma.co.uk/tonesucker.html or http://www.vimeo.com/tag:tonesucker) as well as performing solo audio/visual pieces on the experimental/noise scenes in London and Suffolk. Thank you for your comments and interest in our work.

This album is now available to download for free at this site http://www.fourfins.co.uk There is also new material recorded in 2010 and solo project stuff.