THE LOCAL MOON: An Experience 7" 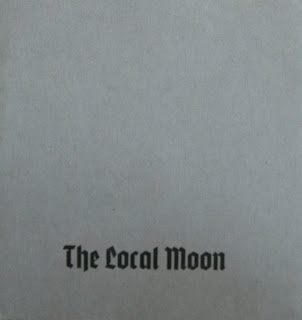 Well, here is the band with the laziest lyricist ever. The Local Moon released only one record, and the lyrics to all three songs were poems by the late American beat poet Bob Kaufman. And since they misspelled his name on the credits, I suppose that maybe it's for the best that they didn't try writing anything of their own.
Of course, since the band didn't spend time writing lyrics, they had plenty of time to write the music, and they did one hell of a job. The standard guitar and drums are accompanied by oboe, clarinet, ethno brass, and more. And while that sounds like it would be bad world music, it is actually incredibly gloomy, experimental, and atmospheric darkwave, especially the incredible "An Experience".
Apparently only a few hundred copies were pressed, and they were bundled with an underground magazine from Berlin called Verwendung - Heft4. I wish I had that magazine, but alas, I'll take what I can find. This is very recommended stuff!

The Local Moon: An Experience
Record Partner Hamburg, 1988
A1 A Experience
B1 Dolorous Echo
B2 Response
(please note: I ripped side B as one song since they flow into each other)

This is perfect because I had never heard a band plying poems, I'd call it innovation, I think that's something perfect to be listened not hearing listened because poems are a kind of art.m10m

This band was from the German Democratic Republic, but the record seems to be produced in West Germany. In the other blog it be told that it was the first officially vinyl record, which was not produeced by "VEB Deutsche Schallplatten".