HOLY TOY - Panzer and Rabbits LP & Why Not in Choir? LP 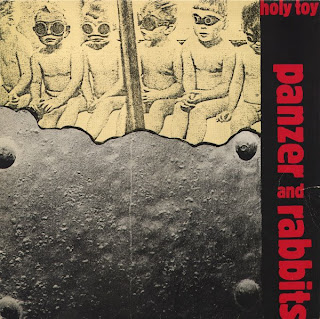 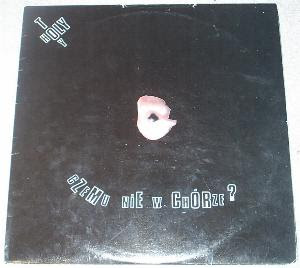 There is always a problem when record shopping with a friend who has similar tastes - especially when shopping in a foreign land, full of records you'll never see back in your homeland, not even in a million years. Inevitably, one of you will find a record that the other covets. Jealousy and envy will rear their ugly heads. Tensions will rise. And records will be thrown at high velocity.
...Well, perhaps that's a bit of a stretch. But still, I was pretty jealous when my friend and I were shopping in Antwerp, and he came over to me, holding a copy of Panzer and Rabbits, and said "Wow, I just listened to this album by Holy Toy. Have you ever heard them?" While I HAD heard them before (and had their first album and their Soldier Toy 12"), I was only a casual fan, playing their record once in a while for background music. But in the moment that he brought the record over, it was as if I instantly became their biggest, most fanatical fan ever.
"YES I HAVE HEARD OF THEM holycrapwheredidyoufindthatrecordIhavebeensearchingforitforYEARS!"
He was... taken aback. Needless to say, he loved the record and intended to buy it. My heart sank. Sure, I was holding a stack of 30 records that I intended to buy, some of which I had been looking for for years (Nuit Blanche compilation, anyone?), but that didn't matter. I needed THIS record as if my life depended on it!
"Um... I'm gonna go listen to this record, now", he said, pulling out a Das Wesen album. I hadn't heard them before, but the cover looked cool, and I winced. Ouch, buddy, I thought as he turned to walk back to the record player. Just twist the knife deeper, why don't you?
So, in the end, I did not get the Panzer and Rabbits LP. However, within 5 minutes of our little exchange, I found a copy of Holy Toy's third album, Why Not In Choir. And my friend let me borrow his album so that I could rip it. ...let's just see if he ever gets it back. MwaHAHAHAHA!
Well, if you have ever wanted to hear the second or third albums by this highly underrated industrial darkwave post punk synth noise experimental goth band, wait no longer. They sound like early Laibach, or mid-80s In the Nursery. Dark militaristic drumbeats, extremely atmospheric noises, synths, guitars, and dark, menacing vocals make this band one of my current favorites. You can find the first album and the Soldier Toy 12" on Mutant Sounds here:


Holy Toy: Panzer and Rabbits LP
1984, Sonet Records
A1 Fresh News-Larve
A2 Last Leader
A3 Doors Of Perception
A4 Armageddon
B1 Men And Dog
B2 Travel Agency
B3 Telegram I
B4 Many Of Them
B5 Captain Bom-Bom-Bom
B6 Telegram II

hehe
when your friend requests his record back tell him what record?? this is mine, i bought it in Antwerp don't you remember?! :-)
thanks for sharing!

Many thanks ... been looking for this one for ages ... and I thought this was a crappy day :o)

Well I like this band, they sounds good, not so bad as many others, I don't listen to much music because I work a lot and ion my office I can't listen music, I like to download any kind of music for listening at home.

Link to P&R is broken. But Why not in choir? is working.
And....
Yaaaaaaaahoooooo, yes, yes, yes! I been looking it very long. In '80 i have only a copy on casette, love it. This music has a special matter for me. Thanx a lot, man!