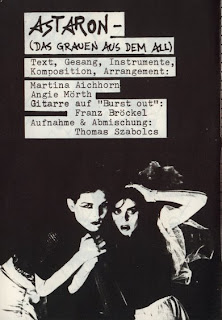 First of all, a HUGE thanks to Stephane who provided me with these tracks. Second of all, I have re-uploaded the Astaron LP and EP.
Get them both here.
Here is the extremely rare tape from Astaron called Das Grauen Aus Dem All (Aka, "The Horror From Outer Space". Unlike their tape "The Slurring", which is pretty much the exact same thing as their selftitled LP, this tape is full of exclusive songs. And this is pure and beautiful, raw, minimal, dark, dirgelike, synthy, gloomy, gothic perfection. I'm not even going to say much more. You're probably not reading this, are you? You probably saw that there's more Astaron stuff to be downloaded and you said "holy crap, screw what this guy is saying, I gots ta download me some o' that!" And you were right to do so. Because if you did read the above paragraph, you just wasted precious seconds you should have spent clicking the download link.
Oh, but if anyone has the song titles, that would be great. I kinda don't have them.

many thanks to you goutroy and to stephane who provided you the tracks!
I like reading your reviews of the stuff you share..it adds more to the excitement..
happy new year! :-)

Wow thanks! one of the greatest never-heard-before bands I discovered last year on this blog.
Don't wanna sound ungrateful but the file doesn't have "Piste 9" or maybe there were only 16 tracks?

OMG!!! THANK YOU! I love Astaron so good...which I heard of course through your other Astaron post.

So amazing, I can't wait to listen!

Cool, from start to finish. Thanks for introducing them.

to be perfectly correct there's more missing besides track 9 (the last 6 tracks of side b)...
see http://www.discogs.com/Astaron-Das-Grauen-Aus-Dem-All/release/1675284
wished i had them to send them in, but i don't...
thanks anyway!

Hi, thanks a lot for posting this great music, the tracklisting is below:
Tracklisting:
A1 Three Nuns
A2 Prisoners In The Bar
A3 Charwomen
A4 Worshipping
A5 Falling Apart
A6 A Young Alien
A7 The Fish
A8 Windy Days
A9 The Musters Heartbeat
A10 Holy Prayers
A11 Tree Nuns
B1 Skinned Alive
B2 Forced To Dance
B3 As I Start
B4 Single Room
B5 The Turtle Man
B6 Lydias Head
B7 Not Yet Dead
B8 Your Face
B9 Goin Back
B10 The Hammer
B11 Too Many Plans