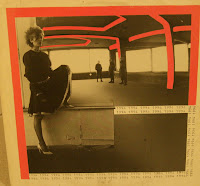 Well, it is the start of a new year, and what better time than now to come back and start sharing some music again? I have now relocated to New York, and finally have time to resume my blog. I have quite a few records that I ripped over the summer and fall, and although a few of them have been shared in the interim (which I may still post anyway, just to get the music out there to more peoples' ears) there may be a few unknown or underappreciated gems. Starting with this nice little compilation, simply titled "1994", released in 1984 on Etiquette Records in Belgium.
You can find songs by some more well-known bands like Linear Movement (who showcase a decidedly lo-fi synthpop song here) and Die Fabriek, as well as a whole array of unknown minimal synth, new wave, and post-punk bands.
While I like this comp quite a bit, there doesn't seem to be that one KILLER song that many of these private-press compilations have (ie, The Enter's song on the Youngblood compilation, the Curcuit 7 songs of Offering of Isca, the Life song on the Music Biz Showcase compilation, or the Glass Actors song on the Sing As We Go collection). Still, it's consistent in its decent quality, and has that amateurish and DIY aesthetic to it - both musically and graphically - that we all love so much.
PS, I just realized track 4 is mislabelled on the mp3, so you may want to change that...
Various Artists: 1994
1984, Etiquette Records
A1 Linear Movement - The Other Way Around
A2 Harbor City - Y En A Marre
A3 French Painter Dead - The Danger Form
A4 Pink Fungus - Entekaam
A5 Masai, The - Guys And Guys
B1 Day After - Political Games
B2 Low Class - The Alienation Ballade
B3 W - Movin' Up
B4 General Fears - Feel Love
B5 De Fabriek - Future Discover
Click here to download this record!
Posted by goutroy at 7:59 PM

Welcome Back, Really, we missed you ! Indomito

Was worried you checked out... Glad you're back.

I'll have to check it out!