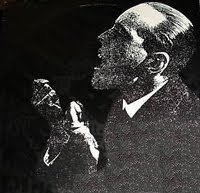 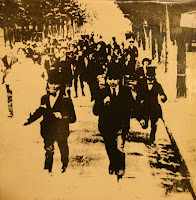 It's great to have friends who are interested in collecting the same music as you. There's an instant comaraderie; they enlighten you to new music that you're bound to love but have yet to hear, and let's admit it - the conversations about recent records you've found, while they may not seem to amount to more than pissing contests, are extremely engaging. Especially when shouted to each other in a divey club after several drinks.
So when I ran into Frank (nee Frankie Teardrop of the always-excellent Systems of Romance blog) at a record store a mere week after living in New York, I was excited and a tad apprehensive. My initial reaction was purely instictual: I saw a couple records in his hands and I wanted to know WHAT records he found. Were they records I could have found first?!? After this thought passed through my mind in a flash (we both found nothing of interest at the shop), we talked about New York, music, record stores - the general music nerd conversation topics. He had just returned from upstate and we decided to visit a record store he had not been to for a while (and which I, being new to the region, had never even heard of). Neither of us were disappointed. I found inexpensive copies of the No Name 12" and the Computer Haben Herzschmerz by REK - the latter of which I had been looking for for quite a while. He found a couple goodies as well, and I even found a couple for him that I already had (the Lilac Dreams EP from Gothic Girls and the Loveland 12").
But there was one record in particular that I found that looked particularly promising, from a band called Dada. Neither of us had seen it before. I listened to the B side and was a little impressed, and listened to only a second or two of the A side. I put it in a pile of "maybe" records. I had a bunch of records I wanted to listen to, and there was only one record player in the store, so I wanted to be quick. Frankie asked to listen to the Dada record after I was done, and after a few moments he said "if you don't want this, I do".
Which piqued my interest a bit. I listened to the A side again. This time I listened all the way through. How had I not noticed this before? The song, Age of Confusion, was one of the best underground late-80s synthpop songs I had heard. Ever. Long and epic, repetitive but not boring, with a steady danceable beat, layers of warm and cold and wailing synths, an amazing synth refrain, great vocals and lyrics, and New Order-ish guitars (and a title that fused two New Order song names), Age of Confusion was just a flat-out great song. I filed the record in my "buy" pile immediately.
Frank took note of the record and found it right away on eBay for dirt cheap. Since that time, either he or I have played it at the Wierd party almost every week, to a packed dancefloor. The record can still be found very easily online. Sometimes the greatest unknown hits are not rare - they're just plain... well, unknown.
Included in this post - a shared effort by both Frank and myself - is the Age of Confusion 12" from 1987, and their later 4-song EP.
Age of Confusion 12"
1987, A Major recording Label
A Age Of Confusion
B Pursuits Of Happiness
Right Men tell Lies 12"
1988, A Major Recording Label
A1 Discussing Missile Size
A2 As The Sun Races By
B1 Separate Ways
B2 The World They Left Behind
Find both here
Posted by goutroy at 7:10 PM

Great find although too much too late. In league with ODW and Comateens and Home Service circa 1980.

Your blogs (systems and goutroy) are amazing. I wish I had the time to listen to everything.

I like this band a lot. Thanks for your hard work finding and posting it. Stephen