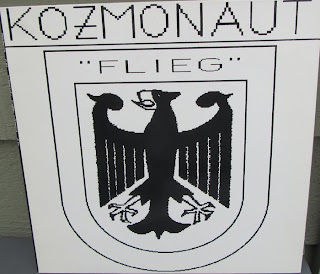 Help us solve this mystery!
Posted by goutroy at 10:11 AM

Thanks for making an exception and posting this on your famous blog! I am the one that forwarded it to Josh. I found it last weekend in a local thrift store.

I am almost 100% certain that these guys aren't Germans. At least not native Germans. It's not just the obvious spelling mistakes, but all the little grammar errors as well. No German would say "Einer Kleiner Walzer". It's "Ein Kleiner Walzer". It's not "Arabisch Nacht". It's "Arabische Nacht".
In addition, I find hard to believe to find a seemingly unknown foreign record here in the Bay Area. Over time, I found dozens of unknown local records that I couldn't Google any info on, but nothing beyond the Californian borders let alone American borders. (Most of the time, there's a good reason why these records are unknown...they're junk.)

Another thing that struck my attention is that oversized German eagle on the front cover to boast the idea that they're German. To me, that's overkill. If they were really German, I think there would have been something else on the sleeve. Also, why no personal credits anywhere? May be their names are not "German" enough. I don't know. It may just be coincidential, but the lines on the back of the sleeve almost look like a swastika.

I hope somebody will come forward with some information and solve this mystery.

It's definitely an excellent LP that can hang with the best and deserves to be put on the map. Some of these songs could use some re-edits to be a little crisper and better sounding.

I met Peter Ziegelmaier this afternoon. I have more info on this release that I want to share with everyone. Hans Schiller did the "Flieg" LP all by himself prior to meeting Peter in 1989 (Kode IV).

Again, this LP is not German. The reason why everything is written in German is because it was Hans' take on Kraftwerk's music, which he was a huge fan of and tried to copy (some Kraftwerk samples can be found on "The Mann").

This LP was pressed exactly 1,000 times in 1986. However, it was never commercially sold nor handed out to local DJs. All 1,000 copies were stored in Hans' basement. He did not think this LP was good enough to be released. He held on to it for several years before discarding all the copies. He did not want ANY copies to leak out in order not to be defined by this type of music he didn't think was good enough. Peter repeatedly ask him for a copy, but Hans would not give him one. Long story short, somehow, an unknown amount of copies (most likely very few) survived. One of these copies turned up in a local thrift store in May 2010. I have no idea where it came from or how it got there.

Hans did another cassette only release under his Kozmonaut alias. It came out in 1988. It was pressed in even lesser quantities. Same story, Hans discarded all the tapes as well (Peter has seen them as well). It seems like this tape has not surfaced to this day. It may be lost in time for good...be on the lookout for this cassette - it is called "Hyko". I have no additional info. I don't think anyone has ever heard it besides Hans.

In 1990, Hans and Peter had several releases as Kode IV. Info on the band can be found on wikipedia and Discogs.

What a great blog you have. I'll spend many hours returning to read other entries. Thanks, Styrous