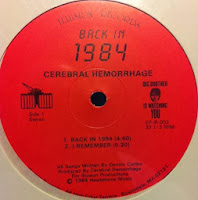 Click here to listen!
Posted by goutroy at 3:09 PM

this is an incredible find, thank you for sharing!

This isn't an unknown record to collectors. It has been known for at least 5 years. I have it, and quite a few other collectors do as well. There were numerous copies on ebay a few years ago that regularly sold for around $50, and they had complete sound samples of the 1984 song. Anyway, its an amazing record, but its not unknown. Neither was The Famous Rays by the way. I've had that for more than 5 years as well.

So why hasn't one of you been so kind as to digitize and offer them to those who cannot afford to collect those records? :)

So nice to see you're still a douchebag, Obscure. Keep up the superiority complex.

Oh, and just because five dudes with an endless bank account were able to track this down years and years ago doesn't make it "known" to all. Jesus, man.

Phil said " Astonishingly and inexplicably, this is a record that has flown under the radar of pretty much every minimal synth collector out there"

This implies that no collectors knew about this record, and he is the first to have discovered it and that this is the first time it has been shared with the world. I thought that that came across as douchey. I don't consider phil's blog or posts in general to be douchey, but that seemed to be, and it was also wrong. Especially considering the record was on ebay numerous times with full sound samples. So I thought he should know.

Anyway, keep up the hating of someone you have no idea about. I'll have all the original records and you can keep all the hate.

I sincerely hope you lose all your records in a house fire, Stephen.

Actually that statement means most, not all, you dipshit.

If you're worried about what comes across as douchey, you should probably consider deleting your posts.

The dark side is strong within you.

Anyway, I don't have to delete anything I post. People know I'm not a douche. I'm punk dude. I'm guessing you are a little slow though considering you don't know that yet, and the fact that you can't decipher that Phil's description implied this Cerebral Hemorrhage record to be an unknown record to collectors.

That's what everyone's waiting to hear.

While goading Stephen to type out these crazy rants is a national collector's past-time, it's just too damn easy sometimes. Kind of takes the sport out of it a little.

"So nice to see you're still a douchebag, Obscure. Keep up the superiority complex."

"Actually that statement means most, not all, you dipshit."

Are you scared to sign your name to these literary masterpieces?

Anyway, good luck with your mental illness.
You definitely have deep-seated issues.

There are a few of us leaving these comments, Stephen.

If you can put me in touch with anyone involved in Cerebral Hemorrage, please contact me at permanentwax (at) gmail (dot) com
Thanks,
Lance