Radio Ghosts: Handfuls of Everything mLP 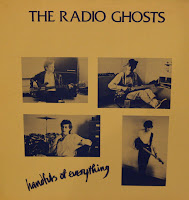 As I prepare to take a vacation-induced hiaitus, I figured that I would share a couple records since I won't be posting too much for a little while. Here is a gem from that I found recently, by a band called Radio Ghosts. They hailed from the fertile post punk and indie scene in Scotland, and released this 12" mLP on their Grampaphone Records (haha!) label. The album starts off with the most gurgling, ominous, dripping synth sound I've heard in a while before it mixes with wonderful Orange Juice style post punk to perfect effect. While they aren't really a synth band per se, they do incorporate it pretty effectively in several tracks, including the aforementioned title track and the minimalist closing track.
The slow/quiet-loud/fast-slow/quiet style of Run is also quite appealing, although the song is the first place where the sax makes its appearance (mercifully, it's pretty restrained). It's another song that shows a pretty heavy Josef K and Orange Juice influence, betraying its Scottish nature. The first tracks of each side are the absolute highlights. Side 2, track 1 is a full-on rush of post punk that sounds like Artery playing with early A Certain Ratio, and features the densist, heaviest spazz-bass EVER - it's enough to make a quadrapalegic gyrate like James Brown. Even the sax is used in great blaring Blurt-like fashion and adds to the frantic insanity.
I have no idea why this band doesn't have at least SOME appreciation; they seem to be waiting to be rediscovered. Perhaps their lack of widespread pop appeal was in part due to the completely no-frills DIY sound of the album (for example, the sudden volume change about a minute into Reflex Reaction is NOT something I did when ripping it... it's present on the album). I know that some of the members went on to other bands - the singer, Martin Cotter, formed the C86 indiepop band Bachelor Pad a few years after this ablum was released; Paul Quinn, the bassist, later released a few records on (what else?) the Postcard label and released a kinda mundane synthpop single with Vince Clarke before joining bands like Teenage Fanclub and, most notably, The Soup Dragons.
Ultimately, this is an artifact of early-80s post punk that will appeal to fans of all those kinda-pop, kinda-punk, kinda dance bands like Orange Juice and Josef K and Artery and They Must Be Russians (as well as more recent similar bands, most notably debut-LP-era Franz Ferdinand), so click below!
Radio Ghosts: Handfuls of Everything mLP
1982, Grampaphone Records
A1 Handfuls Of Everything
A2 Reflex Reaction
A3 Run
B1 I Won't Tell You Lies
B2 So Cruel
B3 The Big Man Bites The Sidewalk
Click here to listen!
Posted by goutroy at 3:10 PM

Hey - Radio Ghosts rule. They also released a single 'Author' b/w 'Mr Room' on Positive Noises Statik label. Band members also played in a group called Rapid Dance who released a single 7". They were also linked somehow to Apes in Control (1 7" and 1 12") and Wee Cherubs (a 7" 'Dreaming'). Glasgow had a truly impressive post punk scene, far beyond the Orange Juice/Simple Minds axis and there are so many obscure treasures out there. Many thanks,

This one I liked.

IT IS NOT THE SAME PAUL QUINN WHO PLAYED WITH TFC