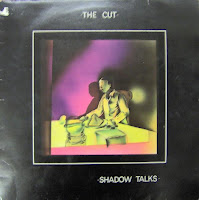 Here is a record from a pretty obscure Norwegian band called The Cut. Aside from being comped on one of the New Wave Complex cd-rs, and more recently the excellent Maskindans double-CD, this band has remained largely unknown. Perhaps they would have found more mass appeal if they were from the UK or even the US, but instead they were relegated to being "big in Scandinavia" which regrettably did not grant them much reknown, nor does it sound as impressive as being "big in Japan".
Their music, however, will certainly appeal to almost any fan of new wave or synthpop. They combine jerky guitars and some great new wave riffs, washes of synths and electronics and the perfect amount of blasse vocals. They sound like they take their cues from their British counterparts, most notably Gary Numan and Tubeway Army, as well as the eccentricities of the Neue Deutsche Welle scene (one standout song is actually sung in German), with vocals that sometimes recall David Byrne.
This is an album that hits you over and over and over with excellent tracks - from the bouncy "The Crowd" with deceptively macabre lyrics about death, misery, and burning flesh, to the dark new wave synths of the German-sung In Dieser Stadt. It's surprising that such a great album (that was issued twice, on two different labels, and later on CD) STILL has not received much recognition. I can't recommend this one highly enough - if you liked their contribution to the Maskindans CDs, or if a cross between Gary Numan and Surplus Stock appeals to you, then you need to check this record out.
The Cut: Shadow Talks LP
1982, Ultraphone Records
A1 The Crowd
A2 Disguises
A3 I Wish It Was Simple
A4 Atmospheres
A5 From Day To Day
B1 In Dieser Stadt
B2 Television
B3 Supernatural Conspiracy
B4 Break It
B5 This Time
Click here to listen!
Posted by goutroy at 3:10 PM

This is excellent. Thanks a ton for this one.
By the way, "The Crowd" is based on a Ray Bradbury story with the same title. And "In Dieser Stadt" is a cover of a song by a German (obviously) singer named Hildegard Knef back in the 1960s.
But as I was saying: this is terrific, and exactly what I was in the mood for. Thanks again!

Thanks for this one - been looking for it for quite some time, and am thrilled that it has finally cropped up. Thanks!

Quick question: in the .zip, there are two tracks named Atmospheres, both showing as being track A4 and one is smaller in size/duration than the other. Could you please clarify why this is?

Great band that has out a album (came later) an mini LP/EP (their debut) and some singles. Very collectable band. If any can sell me their "In Dieser Stadt" 7" with ps on Polarvox (Finland) i`ll be more than happy :-)

Yes, this IS a great album. Unfortunately the CD issued about 20 years ago is now extremely hard to obtain. It's a mystery to me why it hasn't been re-released, or at least made available on the streaming services, like Spotify and WIMP.

Every track is a winner. Great band!!