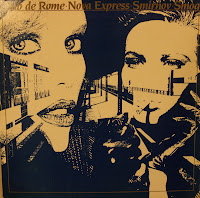 Courtesy of Riegler, the beautiful and discerning San Francisco minimal synth/post punk/darkwave DJ-at-large, comes this virtually unknown compilation that she was kind enough to mail to me to rip and play at a party or two. I've shared a couple of Club de Rome records, and here is a compilation that has an exclusive song from them, during their formative coldwave years.
This compilation was released in 1986 on the tiny Post Tenebras label out of Switzerland. Aside from probably being pressed in a small run of a few hundred copies or so, this record is completely untitled, making searching for it (or even referring to it by name) a futile exercise. The record features eight tracks from four Swiss bands. Club de Rome have two songs here, one of which was the B-side to the Hypnotised 7" I shared a couple weeks ago, the other of which is exclusive. The exclusive song, Murder, finds the band veering close to deathrock territory, with sheets of metallic guitars, a solid bassline backbone, and lyrics at the end that, oddly enough, they would rerecord later ("Why don't you recognize/That my life/is not a dream" would later become the refrain of A L'Est & A L'Ouest Du Crépuscule).
Smirnov, whose EP was shared a while ago on the Capa Nostra Syndicate blog was a coldwave band in the tradition of Norma Loy, Charles de Goal, Asylum Party, and others; both their songs are extremely solid and may be my two favorites on this album.
Smog (not to be confused with the current indie band) was a female-fronted deathrock/dark punk band in the vein of early Christian Death, The Sears, and Blitz. Their song Dream of sand is a particularly excellent track, with aggressive vocals and guitars tuned to attack.
Nova Express are the synth band on this record - both their songs make heavy use of programmed drums, electronics, and cold vocals. Their song on the A side, La Fille Aux Yeux Telescopiques, may be one of the weaker songs on the album, but they more than make up for it on the second side with A 2000 a l'Heure, a definite coldwave gem.
Overall, this comp is quite excellent, and really is more than deserving of a name. Perhaps not giving the record a title helps the record label remain neutral in true Swiss tradition.
Various Artists: Untitled LP
1986, Post Tenebras Records
A1 Club De Rome: Occhio Blu
A2 Smirnov: Cliches
A3 Smog: Dream of Sand
A4 Nova Express: La Fille Aux Yeux Telescopiques
B1 Nova Express: A 2000 a l'Heure
B2 Smog: Better Than I Do
B3 Smirnov: Save
B4 Club De Rome: Murder
Click here to download the record!
Posted by goutroy at 6:45 PM

No comments yet? That's a shame--start commenting, people.
Anyway: this is some good stuff. New (new to me, I mean) coldwave music is always welcome. Thanks!

Many thanks to Goutroy und frau Riegler!

Just want to say what a great blog you got here!

THIS IS GREAT !! AND GREAT SITE TOO !!! Thanx for sharing this ! I appreciate it !