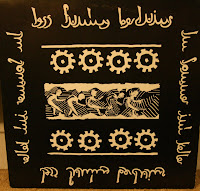 This was the very first record that I purchased after I moved to New York. I had never seen it before and did not even know who the band was. The weird handwritten quasi-Arabic font on the cover was completely indecipherable, and could have said anything from Bass Fuming Berserk to Legs Falling Backwards. And since the cover was the ONLY place where the band name was written, the band's identity remained a complete mystery to me when I bought it. In fact, I did not even find out who this band was until a couple days after I purchased it, after a little bit of internet sleuthing.
The band, as it turns out, is actually called Less Funny Beduins, which I can now kind of see written on the cover, although other times I can also see it saying Lose Fucking Bedbugs, so I suppose it's a Roscharch test of sorts.
The band was from Germany and released this record on Arab Productions, a subdivision of the tiny Independance label, which released records and tapes from sought-after bands like Parchment Prayer and Modern Art.
Boss Tummy Bunnies played a dark, experimental sort of gothic post-punk. The record is full of percussion and chugging guitars similar to post punk bands like Artery or Red Zebra, atmospheric synths and strings and pianos and gloomy vocals similar to Christian Death, and weird time changes and spastic experimentation similar to NDW bands like Sprung Aus den Volken and Leben Und Arbeiten. While Leggy Funky Bearclaws may never become a household name, they definitely deserve some recognition, as this record is quite a gem. And now at least you know who they are (kind of)!
Less Funny Beduins: Im Sommer Im Keller EP
1986, Arab Prod.
A1 Mary Bell
A2 Tout Normal
A3 Arjan/Eifersucht
B1 Es Konnte Viel Bedeunten...
B2 Busho - Busho
Link removed, as the artist has the album available as mp3 downloads - and to listen to - here
Posted by goutroy at 7:06 PM

phil, did you see this EP is available for download with 4 bonus tracks here:
http://www.cduniverse.com/mp3search.asp?HT_SEARCH_Info=6905969&HT_SEARCH=mp3album&style=mp3

i kind of enjoy the first bonus track the most

The track B2 remember me THE VIRGIN PRUNES, excellent EP !!!

@Josh - Nope... that's what I get for writing the description on the train, with no Internet.