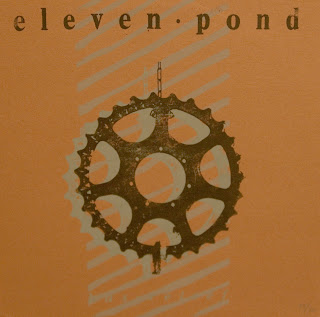 I think this one is going to make a lot of people happy. The band Eleven Pond was from New York, and they released this LP in 1986. I just love the ultra lo-fi, DIY feel of the entire thing: It was self-released (no label, even!) in one pressing of 500 copies and hand-numbered on the front. Both the front and back have silkscreened artwork. It was recorded live to a 2-track (hence the lo-fi nature) and self-produced.
Almost every song is killer dark post-punk or electronic wave. They seemed to take cues from Echo and the Bunnymen, Joy Division/early New Order, Fad Gadget, and Depeche Mode.
As far as I know, this was the only record they ever released (does anyone know for sure?). Songs like Watching Trees, Tears and Cinnamon, Portugal, Ignorant Father, and Temporal deserve to be heard. I can guarantee that nobody will be disappointed in this one.

Get it here:
Link removed because the record has been reissued!
1986, self-released, New York
Posted by goutroy at 4:46 PM

thanks and nice blog but how come i cant unzip this file.

Thanks for the music and info on the bands.

Thanks for this.
Keep on the blog, please.

Thanks for all these lost treasures, please keep on the blog alive. I'm waiting a long time for more fastantic vinyl rips...

Priceless.....aren't you overdue for another upload? :)

Just as a note...I saw these guys back in Rochester when they released this album...as a matter of fact...I have one of them still along with some other off-track cuts...from James Tabbi the lead guitarist/singer...so now he's all grown up and the president of:
TabTronics

Here he is today...
http://www.tabtronics.com/ABOUTUS/Staff/PresidentCEO/tabid/85/Default.aspx

Great stuff! Thanks for the file!

I've been looking for Eleven Pond forever +. Thanks so much for posting this. It will be much appreciated by me and others.

I think I knew the guy on keyboards. I think he joined the Navy.
Can someone post the names?

Who the heck posted this! Wow. Yes, 1986. Insane that people still remember us ! I co-wrote most of the music for Eleven Pond and James Tabbi wrote the lyrics. He was so fun to play with on stage. He would get into this gloomy/happy trance and teen girls would go ape-shit for him. we were influenced by the dark dance going on in the USA and England during the 80's. If people are interested in a re-release I would love some feedback? I'l dust off the Masters and see what could happen? Also lot's of unreleased tracks very similar to "Bas Releif". Maybe 16-18 tracks? On 4-track , 8-track and 16-track old school analogue tape.... Hello to my old band mates!!!!
-Jeff Gallea

Hi Jeff, great to hear from a and member! It's fascinating to see that blogs and mp3 sharing and myspace tribute profiles have given so many obscure and otherwise "lost" bands a new audience, as well as let the band members know that such an audience exists. I think a rerelease would be great, especially if it comes with unreleased tracks. I think there is an audience for a limited-edition reissue, and I know that loads of people would be very interested in hearing the unreleased songs as well. I'll post your response to this blog at www.minimal-wave.org, a site dedicated to discussions about obscure underground bands (such as Eleven Pond) to see what kind of feedback it gets. Thanks for writing!

Hi!
If you re-release your stuff I will definitely go ape shit

I think lots of people would be interested [moi aussi]in a re-release!
..and yeah always cool to see artists respond to blogs with positive comments and actually be happy that their music is being heard by new audience :-)

Like goutroy said, these blogs get a lot of buzz going, and I've seen reissues and band reunions prompted by these posts.

Man, what a great record. This is what New Order (their main influence, I guess) should have sounded like. Thank you very much for introducing me to this ultra rare gem. The songwriting quality is outstanding.

thank you so much for this lp!! love it.

hi there!
great blog... i absolutely looove what u have on here!
although, i downloaded the eleven pond lp and found that most of the songs cut half way through and other ones cut in... such as trisomie 21 and charles de goal..
has anybody else mentioned this happening to them?

Great Album, genuinly up there with the best of its kind.

I would be proud to have a record like this behind.

Sadly my original copy is AWOL...nice to find it again...I came in with my band on the tail end of Pond in good old Roch Cha Cha....was a great scene

What a delight to find this after so many years... I'm from Rochester and I remember hearing some of the tracks over and over on WIRQ in 1986... Even better, it still holds up like some similar 80s favorites like Sad Lovers and Giants or The Sound - great stuff!

Quite effective material, thank you for the article.

I saw so much helpful info here!