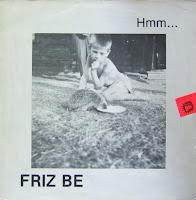 Friz Be is from Switzerland? not from Sweden?

Ha, that's what I meant. My fingers don't know what my brain thinks../.

Thanks! I've been Looking for this for a while!

I requested this years ago on blogs,and found it about two years ago on slsk.You're quite right.This record showed me that coveted does not mean good :D

You're absolutely right in my opinion. Half Brain Naked is beautiful, that alone was worth listening to this record. It always amazes me that such great tunes were hidden between much less interesting tracks at that time. Tunes so great you would keep a whole album for them in your collection. Nowadays it's so different.

Keep going and we expect some more from you…..?