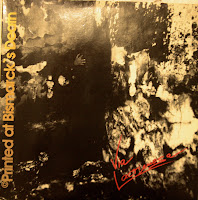 I never really realized how gothic the Christian Bible is until I heard this LP, the first full length from German darkwave/goth band Printed At Bismarck’s Death. These guys approached their music without any sense of irony, which is probably why the Bible has never seemed so bleak. They are not actually a Christian band (at least not that I know of), but they base almost every song on a Christian parable or traditional folk song (such as House of the Rising Sun), sing and chant in German and English, and wrap most songs in a thick blanket of electronics and atmosphere, traditional instruments and full orchestral sweeps, guitar effects and tribal drumming.
While not every song is a winner (the aforementioned House of the
Rising Sun does sound a bit silly, especially since most of us are more familiar with the Animals’ version of it; and a couple songs on side B veer into avant-jazz meanderings) most tracks are about as true to the gothic aesthetic as possible – earnest and layered with impenetrable darkness. And don’t be put off by the late release date - songs like the largely orchestra “Drapa”, the symphonic and experimental “Meet Moshe Dayan In A Russian Bunker”, and the simplistic but effective dark dance of “Pseudo Philon” make this an LP to seek out.

Printed At Bismarck's Death – Via Lacrimosa LP
1991, T 42 Records
A1 Prélude Morbide
A2 Premières Communions
A3 Meet Moshe Dayan In A Russian Bunker
A4 House Of The Rising Sun
A5 Le Juif Errant
A6 Pseudo-Philon
B1 Drapa
B2 The Cold Earth
B3 Three Victims Of Bloody March
B4 Jesus Goes Golgotha
B5 Embryo
B6 Tutuguri (Rite Of The Black Sun)

Click here to listen
Posted by goutroy at 7:20 PM

In my view one and all may read this.

Your blog is very interesting and your way of writing is also very good.

The Link is Offline...
Cant you post it back?
thanx great blog!

The Link is Offline :(
Can you post it again?
Thanx for a great blog!