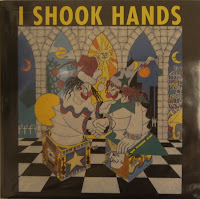 Okay, shameless plug: I have a bunch of records currently on eBay (and will be listing hundreds more for the next couple months), including this one. And that's probably the last time I'll mention that. But I know that people will probably want to hear this. This is a self-released, self-produced, one-man band called I Shook Hands (a sticker on the back credits "Manny" as the sole member of the group, and gives his phone number). There is no year of release, although I'd guess it's some time around 1986-1988 or so. The music is similar to mid-80s Depeche Mode, Information Society, Experimental Products, Red Flag, et al. It's pure danceable elctro bliss, especially on the track "That's Just the Way", which has a repetitive but killer synth line. The singer's vocals are oddly lispy, and the lyrics are a little silly (he rhymes "day" with "day" three lines in a row), but who cares when the music is so damn catchy and good?

Yeah, I was looking at your list on Ebay yesterday, and recall seeing this one. You've got some nice ones on there. IF you don't want to mention it again, I will. People should check them out. Thanks for comeing back around.

Glad to see my single is still floating around.. he track did quie well in the very early 90's..some how wrote that in an hour....followwd up with another great track, I>S>H> Revenge

Ish - Round And Round from 1992. All tracks produced and programmed by "Man". Is Man from Ish and Manny from I shook Hands the same person?