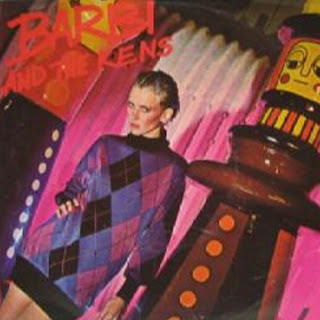 This is perhaps the first and only 7" to be called a "mini LP". This is the only release by Barbi and the Kens (aside from another 7" with only two of the four songs found here). It was
released on Bobby Orlando's "O" Records. The record starts with an irreverent new wave number, Pay My Bills, followed by the bratty, punky Uptown Downtown Cruising. More similar quirky new wave starts off side two with Just a Gigolo. These three songs sound like a mix of early B-52s and Blondie - weird, silly, fun, and highly infectious, with male and female vocals. The final song, Steppin Stone (yes, a cover of the song made famous by The Monkees), is pure danceable minimalist electronic bliss - totally repetitive (think DAF or Robert Gorl, but less industrial and more electro), with thumping synthesized drums and basslines, and completely monotone female vocals. To me, it is the standout track (but even without that song, this 7" is quite solid!).
Barbi & the Kens: Mini-LP
1980, "O" Records
A1 Pay My Bills
A2 Uptown Downtown Cruising
B1 Just A Gigolo
B2 I´m Not Your Stepping Stone
Download the record here!
Posted by goutroy at 8:44 AM

Yeah, I could hear 'private Idaho' seeping into 'just a gigolo' for sure. Cool music.

thanks,
great record, another one I didn't know I needed!
They also seem to add a few lyrics from the Lemon Pipers 'Green Tambourine' in 'Not Your Steppin' Stone'. Reminds me of both the Better Beatles and Flying Lizards, which of course is a good thing
x

great record... except the first song which is not as good as the other 3... not your stepping ston seems so to be the frist electro-clash song 20 years before that genre was invented...

Interesting post above my friend. Maybe you need more time to post and share comments here, but I've the good news, my blog is so much better that yours. Check this out.

With your help, I realized many of the mistakes of the past (as ought not to do), I study with you present (