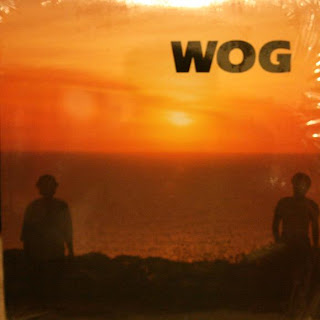 Here is the only release by a mysterious Los Angeles duo called Wog. This duo consisted of Aret Madilian, a Turkish immigrant who had a bit of recording experience in 1983 with a self-released new wave 12", and his friend Ari Excel. They formed this band in late 1983 and named themselves after the Stranglers song "I Feel Like a Wog".
Madilian was on synths/vocals/drum programming and Excel played bass and sang lead vocals. Highly influenced by post punk bands like The Cure, Joy Division, the Stranglers, early OMD, Magazine and Wire, they slowly began to gain popularity in Los Angeles. 1985 was a big year, when one of their demo tracks was played by Richard Blade on KROQ, and they were voted "best unsigned band in LA" by listeners of the venerable station. Throughout the next three years, they continued to write songs but did not release anything until this album, on the tiny LA-based Clandestine Operations label. Despite distribution in both the US and Europe, the LP was pretty much completely unnoticed, and only a handful were sold. The band broke up shortly thereafter in 1989.
I can find no info on what became of Ari; Aret took a hiaitus from recording before eventually moving to northern France and forming the goth/darkwave band Deleyaman (whose site has a great bio of Madilian, from which I got most of this info).
Musically, they play darkwave that sounds like a mix of The Cure, Joy Division, and are even a bit reminiscent of the Juju mLP that I shared last year (which, if you have not heard yet, is HIGHLY recommended!). The repetitious and often hypnotic mix of pianos, synths, bass, and somber vocals give this release a great rainy-day appeal.

Wog: Wog LP
1988, Claudestine Operations
A1 Morale
A2 Guts
A3 I Had A Notion
A4 Moment Of Betrayal
B1 Divine Rave-up
B2 Les Anges
B3 Businessmen In Love
B4 Dialectic

I like to think of myself a conessuire of los angeles underground post-punk. Then I look at this blog and realize there is still much to be discovered for that I thank you.

Wow, this record was much better than I expect! Please keep shar5ing these unknown gems.

Some very beautyful songs on this record. Thank you for sharing

I liked this blog, i think is very interesting, most of all for the new ideas that this blog talk.