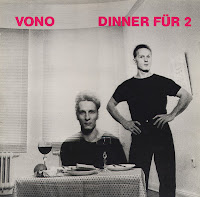 This album takes a love-it-or-hate-it approach to synth music. It is basically the essence of "minimal synth". Two Germans - one on vocals and one behind a Jupiter 8 - released this record on the verneable Sky label in 1982. It's certainly one of the oddest releases on a label more known for its progressive and cosmic Krautrock output. The often arhythmic music is as cold as it is sparse. It sometimes sounds like the duo's first time every playing with a synthesizer as they hit different keys wondering "what does THIS do?"
And yet, in Vono's cave of ice, in which everything is synthesized and tuned to the key of bleep, there is often beauty. Short melodies and instrumental refrains often poke up from the austerity, even if the vocals sound like they're about to detach from the songs and fall off the face of the earth. Songs like Mauertanz 1, Tief Im Dschungel, and the all-too-brief Bitte Wenden could almost be described as "pretty".
A few songs fall into actual structures. Lover Werner and the aforementioned Tief Im Dschungel have many wonderful pop elements. Mit Mir Zum Siege sounds very much like a stripped-down Liaisons Dangereuses song. the first comparisons I drew when listening to this album were to NDW bands like Der Plan and Die Todliche Doris. But this record manages to be less goofy and more focused than either of those bands. It still sounds influenced by those (and several other) NDW groups, but is also redolent of early Kraftwerk or the late Klaus Schultz. The record's minimal and cold nature give it an air of sterility, but its amatuerishness and experimentation give it a human element that endears it more than many of the band's contemporaries.
Vono: Dinner Fur 2 LP
1982, Sky Records
A1 Dinner Für 2
A2 Tanzstunde
A3 Im Schein Des Neon
A4 Lottozahlen
A5 Lover Werner
A6 Mit Mir Zum Siege
A7 Mauertanz 1
A8 Bitte Wenden
B1 Tief Im Dschungel
B2 Hirnregister
B3 Der Zauberer
B4 Nimm Alles Mit
B5 Leben In Irland
B6 Mauertanz 2
B7 Hitze
Click here to listen!
Posted by goutroy at 5:14 PM 4 comments: Links to this post 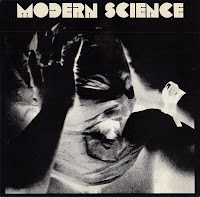 Posted by goutroy at 6:48 PM 4 comments: Links to this post